24 hours as a hunter-gatherer

Levels of sunlight gradually start to increase as the sun rises, gently exposing Zorks closed eyes to more and more light. As more light penetrates the eye, the production of melatonin in the penal gland decreases – reducing the desire to sleep. The penal gland is linked to the thyroid gland, which will now begin to produce very small amounts of adrenaline into the blood stream. The combination of the reduced melatonin and slight increase in adrenaline gradually will lighten Zork’s sleep, and eventually wake Zork up, feeling refreshed.

Typical of most humans, Zork will probably now eat some food, something left over from the previous day, not a large meal, just scraps – perhaps some vegetables or maybe fruit. As foods passes into the stomach, the digestion process is stimulated which will further assist Zork in waking up. Enzymes are produced to break down the food, and the digestive system will start to push food through itself, to allow room for more food, by action called peristalsis. It is likely that this small meal Zork has just eaten is quite high in carbohydrates and low in fats, meaning it is easily and quickly digested. As these carbohydrates are broken down and absorbed, the cells in Zorks body will be bathed in sugars which will allow them to easily produce energy – stimulating Zork.

The action of peristalsis has pushed fibre, waste and undigested foods, which Zork had eaten the previous day, to the end of the digestive system which is not very comfortable for Zork – it is likely that Zork may now decide to poo.

Refreshed and fed, Zork is now ready to take on the day with the rest of the group. Top priority as always is getting food. Everyone has eaten what was left from the previous day, and there will be hungry mouths to feed soon. Most of Zork’s group will go looking for food, but it is the men which will go hunting.

Zork, and other men will now set of to find something/ somewhere to hunt with very basic equipment (maybe a spear) – and they will walk.

Leg muscles will be doing most of the work here, and Zork will experience low intensity aerobic exercise. This will cause the cardiovascular system to pump blood a little bit harder around the body which will strengthen the heart and blood vessels. Zork has fairly strong lungs, and so it is unlikely that they will have to work much harder at getting air in and out, and will only require movement from the diaphragm to do this. The muscles in the legs will be relaxing and contracting regularly to facilitate walking, this regular contraction and relaxing will strengthen the nervous system, leg muscles, and help pump blood away from the legs back to the heart/lungs. These muscles will be respiring slightly more than other cells, and will be producing slightly more radicals. This is of no concern to Zork, because not only is he not aware of radicals, but the increased blood flow to the legs will provide an increased number of free radical fighting compounds – easily neutralizing them. Zork and his group of hunters will walk different distances each day to find food, but today they are lucky, and only needed to walk for about 45mins until they stumbled upon a boar. 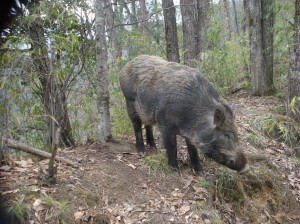 The boar runs, and so must Zork, and fast! Leg muscles are now pumping hard, and Zork may need to jump over obstacles to keep up!

Zork is now experiencing anaerobic exercise. Leg muscles are relaxing and contracting rapidly to propel Zork forward at speed – using vast amounts of energy from a combinations of fats, amino acids and sugars to fuel them. Small rips will begin to form in the muscle fibres because they are under such intense stress. The heart is frantically pumping blood to the leg muscles, trying to supply them with enough nutrients to allow Zork to continue to run. Oxygen is in high demand in these muscles, and the body cannot get enough to them which causes anaerobic conditions – but it tries. Lungs are breathing deeply, and the diaphragm and intercostal muscles are working hard to maximize lung volume, move fresh air in, and old air out causing Zork to breath deeply and rapidly. Still, the increased activity of the cardiovascular system and respiratory system cannot provide enough oxygen to the leg muscles, and lactic acid begins to be produced – causing a burning sensation in Zorks legs. This increased in activity has raised Zork’s body temperature, after all, respiration gives off heat, and Zork’s cells are respiring hard and fast! Glands all over Zork’s skin produce sweat, which is a combination of minerals, water and waste products such as urea. This evaporates off Zork’s skin, offering some cooling effects. Another response to the intense and extreme stress on the body from exercise the pituitary gland and hypothalamus release endorphoines, which act as a natural pain killer and mood enhancer – making Zork feel euphoric and unaware of the pain.

Zorks body is reaching its physical limits, and he cannot keep this up for much longer! Fortunatly, they manage to get the boar within 10 minutes.

Once the chase is over, Zorks can stand still, but his body will still be working hard. His lungs will still be gasping hard for air, and heart will still be pumping fast – his leg muscles still require large amounts of oxygen as they have built up an oxygen debt. Within five minuets or so, Zork’s breathing and heart rate begin to normalize as his body recovers. Endorphins are still surging through Zorks brain, and it is a combination of these endorphins and a successful hunt that makes him grin.

Zork and his fellow hunters, now with a hearty meal secured, will probably leisurely carry their prize back to their home. He may stop on the way to drink from rivers, or possibly even eat fruits he sees on his journey back, but he probably won’t stop long or look too hard for food. Zork will now experience low intensity aerobic exercise again. 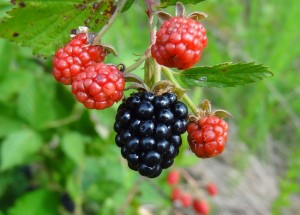 Upon arrival back home Zork might pick at some food again that others have gathered, but nothing substantial. Zork is not a good cook, so the preparation of his catch goes to others, but Zork still has work to do. Zorks family is growing, and some more shelters need to be made.

Zork will now lift, carry, drag and build. This is intense on his upper and lower body, and he will move between aerobic and anaerobic phases in many muscle groups, and it may be for a few hours.

Once the work is finally done, Zork has a look at how the food is going, it is nearly ready, but not quite done yet. Zork may socialize for a while or try and pick at food – he is hungry! The days exercising has drained Zorks blood sugar levels, much of the glycogen which is stored in his muscles/ liver, and also some of his fat. His digestive system is empty. A hormone called ghrelin is produced in the stomach which is making Zork experience hunger.

Finally the food is ready to eat, and Zork hungrily eats the meat. There will be other foods to eat too, but everyone, including Zork, is most interested in the meat. It will be high in calories and is quite a treat. Digestion of this meal is much slower than other meals he has eaten, this is a large meal, full of fats and proteins which slow down the digestion process. As these nutrients are assimilated into Zorks body, the body can begin to repair itself from the stresses of the day. Tears in muscles will heal and energy stores in Zorks body will be replenished. 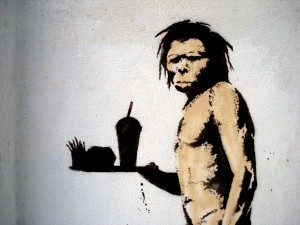 Zork may socialize and enjoy the company of all of his group now, as night draws near, everyone is home. As night draws in, the combination of the large meal, exercise and a decrease in sun light makes Zork feel tired. Melatonin starts to be produced in the brain again, and Zorks body is still feeling tired from all the physical activity – Zork goes to sleep.

If this is the blue-print for a healthy body, how close does your diet and lifestyle compare to Zork? Are you as active? Do you eat anything like Zork?