For many, microwaves are a miracle. They offer a quick and efficient alternative to conventional cooking, and with meals designed to be cooked in a microwave oven, they are...

For many, microwaves are a miracle. They offer a quick and efficient alternative to conventional cooking, and with meals designed to be cooked in a microwave oven, they are regularly used in many peoples lives, especially those who are busy. Microwaves are not exclusive to cooking though, and are also emitted from mobile phones and other electrical devices (but to a lesser extent than microwave ovens). With their regular use, and the fact that they are artificial, there has been growing concern that these waves can pose a significant health threat. This article will investigate how microwaves work, and the current evidence investigating their impact on our health. So.. are microwaves dangerous?

Microwaves are similar to radio waves, but have a much smaller frequency/ wavelength. Radio waves can have a wavelength of several thousand kilometres, whereas the wavelength of microwaves is between 1m and 1mm. Typical microwave ovens use a microwave at 2.45Ghz, which is approximately a wavelength of 12cm. This wavelength is used because the molecular bonds in water are able to absorb the waves energy, causing the molecules of water to vibrate. This vibration of water molecules causes heat, which is transferred to the surrounding molecules (food), which causes the food to warm up rapidly. 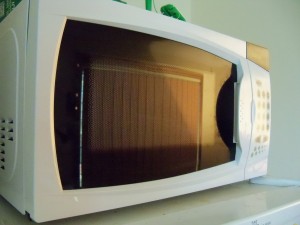 Microwaves and your health

A major concern for the health risk of microwaves is that they can waves can ‘leak’ out of the microwave oven and into our body. Microwave ovens are designed to contain all the microwaves they produce, however, some microwaves will penetrate the glass door. The amount that does leak is very low as long as the microwave oven is well maintained and in good condition, and the heating effects of the microwaves is, in theory, negligible for the body. This is because the very few microwaves escape, microwaves only impact water molecules and the body is extremely effective at regulating its heat. However, there are tissues which are at a higher risk than others. Tissues which have a limited blood supply and so limited ability to regulate heat (such as eyes) are susceptible to microwave damage. This is of particular concern, as many people watch their food as it heats up, sometimes very closely, and so can cause damage to their eyes. Other tissues, such as testis are very sensitive to heat changes, but as long as microwave ovens are used properly and well maintained this is not a concern.

Short term safety studies indicate that there are no negative health effects of using microwave ovens, however there are no long-term studies to support this. This is largely due to the difficulty in tracking side effects and confounding variables in long term studies. Current evidence and scientific theory suggests that they are safe for use, and that the biggest health risk is burns from touching heated items.

Weak correlations between regular microwave oven users and poor health has been made by some outside of clinical trials, which has resulted in many to believe that microwaves do have negative health implications. This is not necessarily the case though, as regular users of microwave ovens share other traits aside from regularly using a microwave oven.  It has been noted that regular users generally have a poor diet (and so often low levels of micro-nutrients) and often experience stress. Both of these can cause an increase in disease, meaning that without further evidence conclusions cannot be drawn. Microwaves have also been shown to damage some nutrients in food, especially if the food is heated to extreme temperatures, which could also result in nutritional deficiencies.

Mobile phones produce microwaves similar to that of microwave ovens, with a frequency between 15cm and 30cm. Although the microwaves that mobile phones produce are very weak, their implications on human health are of particular concern as mobiles often are either close to the brain (whilst in conversation) or near reproductive organs (in a pocket). The majority of studies in animals have shown that these microwaves do not alter the values of bio-markers (hormone levels/ DNA damage etc) in either the brain or reproductive tissue, but authors of these studies do suggest more research is needed and that their findings are not conclusive. One study in hamsters showed that an hour of exposure to microwaves increased the permeability of the blood-brain barrier, but a complete recovery was observed after 2 hours. Human studies on this are very limited, but one small study (41 volunteers) showed that exposure to mobile phone like waves for one hour increased the levels of a hormone called transthyretin. Transthyretin is responsible for transporting thyroxine and retinol into the cerebral fluid, and elevated levels of transthyretin are associated with damage to the amyloid plaque of the nerves in the brain which can cause the development of neuro-degenerative diseases. These finding are far from conclusive evidence though, and the health implications of these findings are unknown. Certainly more research is needed in this area, and other bio-markers in humans need to be investigated.

Short term studies indicate that the use of a well maintained microwave oven poses no risk to users. However, if users look closely at the food cooking, or if there is damage to the oven it is possible that tissues such as eyes can be damaged. There have been no long term studies investigating the implications of regular microwave use, and correlations have been made between regular users and disease, but this is far from conclusive. More research is needed to ensure that regular use poses no health risk, and until this is conclusive microwaves should be used sparingly.

Microwaves emitted from mobile phones is a major concern, and although there are very few human studies on this, one study has shown that exposure of 1 hour does increase the levels of one hormone in the body. This indicates that more research on more bio-markers is desperately required, to determine the full impact on mobile phone usage on our health.