Can Certain Foods Increase Your Lifespan?

Getting old is something everyone dreads and fears – its associated with sore joints, memory loss, achy limbs, wrinkles and an unreliable bowel – things everyone wants to avoid...

Getting old is something everyone dreads and fears – its associated with sore joints, memory loss, achy limbs, wrinkles and an unreliable bowel – things everyone wants to avoid for as long as possible, if possible. The big question is can eating the right food increase your lifespan or health-span, or is ageing encoded in our genetics and beyond our control? This post will explain the reasons as to why people age, ways you may be able to slow down ageing, and calculate the maximum age a human can reach.

The life expectancies for both genders has dramatically increased over the last 100 years, but females have consistently had a longer life expectancy than males, suggesting that it is more than developments in modern medicine causing this. One key gender difference is that women produce much more oestrogen than men, and this has been shown to have protective effects against cardiovascular disease, which is one of the most common causes of death for men.

Women also lose iron through menstruation, which is also thought to have protective effects. Iron is a valuable resource in the human body, and limited iron in the body is a limiting factor in pathogen growth. If there is excess iron in the body pathogens will be able to utilise it and thrive. These pathogens will then produce various toxins in higher quantities which can cause oxidative stress, weaken the immune system and damage the body over time. Excess iron can also cause redox reactions which can cause further oxidative stress on the body, further taxing its resources. Women rarely have excess iron, and so naturally keep pathogens at bay this way and minimising unwanted redox reactions, easing the stress on their immune system and reducing the chance of oxidative stress.

Women also don’t smoke as much as men (although this is changing), which is thought to be another reason why men tend to have a shorter life expectancy. Smoking is obviously very damaging to health, and it is unsurprising that it can reduce you life expectancy. Research has also shown that women eat more fruit and vegetables than men, which are packed with micro-nutrients which can help to protect/ repair the body, and reduce the rate at which the signs of ageing develop.

So the gender difference seems largely due to genetic factors, although there are diet and lifestyle choices which do also seem to impact it.

This free radical theory states that our ages is related to the amount of oxidative damage our cells can withstand. The more oxidative stress on the body = faster ageing, and the more oxidative protection the body has, the slower the ageing process is. This theory makes sense, and we know that oxidative stress causes DNA damage and is associated with a whole host of ailments and diseases, so it is no surprise it can contribute to quicker ageing and even death.

Two of the main sources of oxidative stress in the body are hydrogen peroxide (H2O2) and superoxide (O2-), which are both produced in mitochondria during respiration in every cell of the body. So, more energy created in the body means more reactive species are released, which would reduce lifespan. Careful how you interpret this though, it doesn’t mean you should do as little exercise as possible, exercising is associated with increased longevity, and lethargy is associated with a short lifespan. These radicals are neutralised by enzymes which we produce in our cells, so in theory, the more efficient are body is at producing these enzymes = less oxidative stress = longer lifespan. From looking at a number of animals ability to produce these enzymes and their lifespan it does seem that there is a very clear correlation (see graph below). These enzymes are regulated by our genetics, and although some foods such as turmeric are thought to increase the expression of these genes, eating these foods will only go so far in preventing ageing. 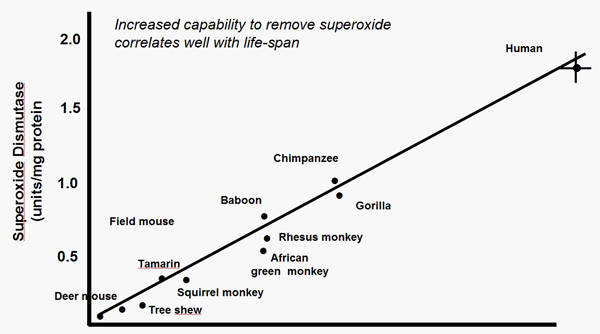 There are other sources of oxidative stress which are also associated with ageing. Smoking, alcohol and excessive exposure to sunlight are other major major sources of oxidative stress and are associated with signs of ageing (such as wrinkly skin) and a lower life expectancy. So although hydrogen peroxide and superoxide radicals are largely regulated by genetics, can nutritional defences against other radicals delay the ageing process?

It would seem it probably can. Below is a graph showing the effects of a diet supplemented with antioxidants against a normal diet of fruit flies. 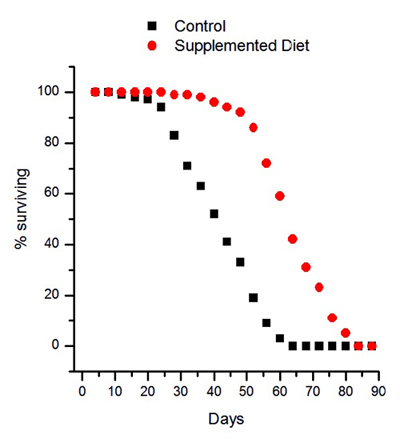 You can see that flies with a supplemented diet live longer than those who weren’t supplemented, but not beyond what would appear to be their maximum age (approximately 80 days).

There is evidence that our age, or rather a maximum age is pre-programmed into our DNA by a part of our genes called telomers. Telomeres are long genetic codes which are found at the end of chromosomes with the sole purpose of protecting the ends from damage and fusion. Telomeres themselves can get damaged, but because they are simple sequences an enzyme called telomerase can reattach any damaged or lost sequences. As all mammals show signs of ageing (wrinkles, grey hair etc) the length of the telomeres shorten at each cell replication, which makes DNA more vulnerable to damage. This suggests that there is a limited amount of times a cell can successfully replicate.

Other evidence to support this theory is that immortal cells such as cancer cells do not experience telomere loss during replication. As the name ‘immortal’ suggests, these cells do not die unless they are killed, and so avoid any ‘programmed’ death.

Unsurprisingly, there is a large amount of research in how telomeres can be preserved, or even extended. The idea being that this can increase health-span or even life-span. There is some evidence that chemicals found in a herb called astragalus can increase the amount of telomerase in cells. Its still early days for this research, but current evidence does show some promising health benefits of astragalus.

What is our maximum age?

The metabolic rate of animals is directly proportional to the maximum lifespan (this ties into the radical damage and genetic factors of ageing already mentioned), and that each species can only consume a maximum of 60,000l of oxygen. Below are some examples which were observed:

If we translate this information to humans our maximum lifespan would be approximately 122 years, and the oldest human recorded is 122 years and 164 days old, so it does seem like an accurate predictor.

Can food increase your lifespan?

Yes, I would say so, to a certain extent of course. A diet high in antioxidants (fruits and vegetables being the best sources) will help protect the body from oxidative stress which is associated with a massive number of ailments including ageing. Other foods such as turmeric may also be able slow down the ageing process by up-regulating the genes which fight some of the most common radicals, but the extent of this benefit isn’t know. Minimising radical damage will only delay the signs of ageing, and it seems that our body does have a finite lifespan. The trick is maximising this time, and with a calculated maximum lifespan of 122 years but a life expectancy of around 80 years, there is plenty of room for improvement.