Dementia is a mental disorder which is rapidly on the rise in the UK as well as a number of other countries. Dementia is defined as a loss of...

Dementia is a mental disorder which is rapidly on the rise in the UK as well as a number of other countries. Dementia is defined as a loss of cognitive function, with memory loss being one of the most recognized symptoms. Other symptoms do exist, and these include difficulty with speaking, poor attention and poor problem solving. Approximately 5% of people over the age of 65 will suffer from dementia to some extent, and in some cases will require full time care, which can affect the whole family. As dementia is such a growing concern for many it is important to understand how it works and ways to protect against it. This article will explain how dementia occurs and what factors (genetic, diet and lifestyle) will increase/ decrease the risk of developing it.

The term ‘dementia’ can be split into 4 sub-categorizes, which depend on the cause of the condition, and have slightly different symptoms:

Alzhimer’s disease – This is characterized by protein plaque build up in the brain, which can cause neurons to die. Alzheimer’s is the most common form of dementia, and is most noticeable by causing memory loss in the sufferer.

Fronto-temporal dementia – This is quite a rare form of dementia, and is characterized by protein build up and cell death in the frontal (behind the forehead) and temporal lobes (behind the ears) of the brain. This form of dementia is usually characterized by erratic and unusual behaviour, repetitive behaviour (such as rubbing hands), lack of empathy and loss of inhibitions.

The only form of dementia which has had a conclusive link to genetics is Alzheimer’s disease, and there are a number of genes which have been shown to be involved in the risk to varying degrees. The most influential gene for Alzhimer’s is a gene called the apolipoprotein E (APOE), of which 3 forms exist (ε2, ε3 and ε4). Everyone will have 2 forms of this gene, meaning there is potential for 6 variations. Having 2 forms of the ε4 gene means you are 10 times more likely to suffer from Alzheimer’s disease than any other genetic combination, but it is still not a guarantee you will develop the disease.

There is some evidence to show that fronto-temporal dementia runs in the family, which suggests it will also have genetic factors, but as of yet, none have been identified.

A number of dietary links to all types of dementia have been made, but due to complexity of the ailment and difficulty in accurately measuring peoples diet over a long period of time the reliability of data is questionable. This being said, low levels of dietary omega-3 fatty acids have consistently been shown to increase the risk of dementia. With a number of studies supporting these findings, and the role of omega-3 fatty acids in brain function being well understood, it is very possible these findings are indeed true. Omega-3 fatty acids are most abundant in oily fish, nuts and seeds, and by consuming these foods it is possible that you will reduce your risk of developing dementia. 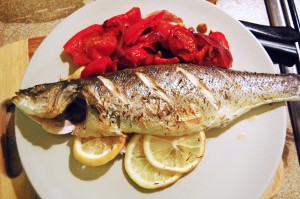 Fish is a great source of omega 3’s

There is also emerging evidence that caffeine has neuroprotective effects against Alzhimer’s disease. The mechanism by how this works has been identified, but has only been shown in mice, so it may not translate into humans (although it is quite likely). Dosages used were equivalent of 500mg for humans, which equates to approximately 5 cups of instant coffee a day. This amount of caffeine has also been shown to increase the risk of other mental conditions such as anxiety, and its negative effects need to be taken into account when considering its protective effects.

It is important to remember that a generally poor diet (especially one high in trans-fats) will increase the risk of dementia, and omega-3’s/ caffeine are not alone in ensuring a healthy brain. A variety of micro-nutrients (particularly vitamin B12/ folate) have also been linked preventing dementia, and so it is recommended that a varied and healthy diet is the most important in protecting against dementia.

Keeping a healthy mind isn’t just about what you eat, there is mounting evidence to show that exercise can help prevent dementia, and even for those suffering, may help reduce the progression of the disease. These finding have been further supported by a review by the Cochrane Collaboration, although further research is needed to determine specific about the type of exercise and extent of benefit.

Smoking has been linked to developing vascular dementia. This is because of the negative impact smoking has on the cardiovascular system, which increases the risk of stroke, and reduces the efficiency at which your body supplies its cells with oxygen.

Dementia is a complex condition, which can arise from a variety of factors, some of which may still be unknown. There is a strong genetic connection for developing the most common type of dementia – Alzhimer’s disease, but even the presence of these genes do not mean developing Alzhimer’s in inevitable. Genetic factors for developing this dementia are beyond our control, but there are factors which can be controlled. A healthy and varied diet, particularly one high in omega-3 fatty acids, not smoking, and regular exercise are all factors which are associated with a reduced risk of developing dementia.

Images courtesy of this is markb, su-lin, Telemachus and _moonpie.