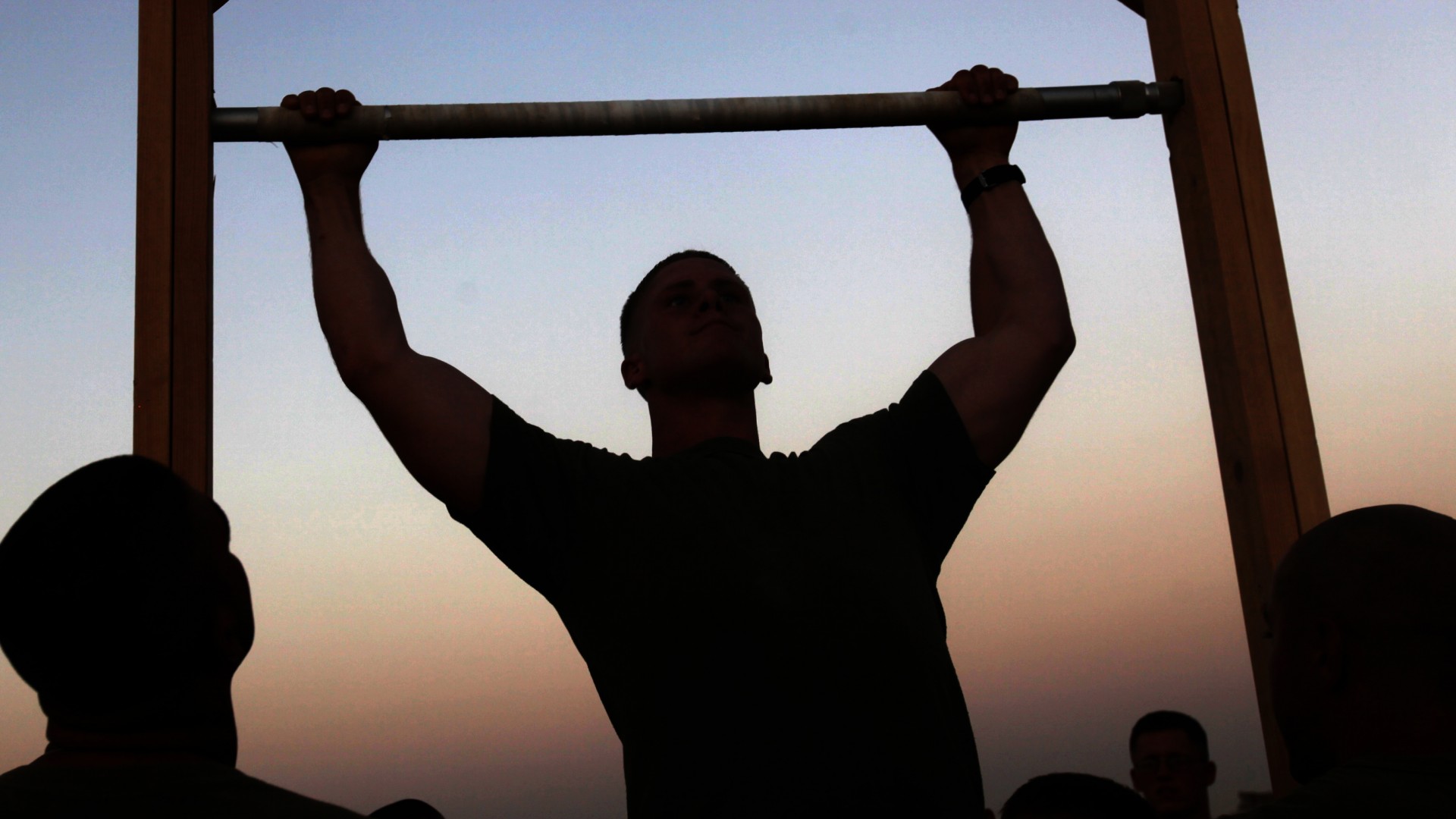 Do you need antioxidants when you exercise?

“If you exercise, you need to take some antioxidants” – That’s what most personal trainers will say, most athletes will say, and generally anyone who is in an exercising...
by Craig Elding June 4, 2015

“If you exercise, you need to take some antioxidants” – That’s what most personal trainers will say, most athletes will say, and generally anyone who is in an exercising sphere will say. The main reason for this is that exercising produces a huge amount of radicals, and can damage our cells.

People exercise for different reasons – to become faster, stronger, healthier, lose body fat etc, but they all have one thing in common – they all want to get better at it, which means muscles need to become more efficient/ bigger. To do this, muscles need to be exercised in the right way, fed in the right way, and allowed to recover/ grow in the right way. The body will do this naturally, but produces some serious radicals (see below), which for a long time have thought to be a harmful and unwanted product of exercising. However, as more and more research on exercise is being done, it is now thought that these radicals may play a vital role in triggering the growth/ recovery of the muscles. If this is true, then the antioxidants which everyone has in their pre/post/intra workout drink might not be as good as originally thought.

Below is a list of some of the most common radicals produced in your muscles when you exercise. These radicals fall into 2 distinct groups – ROS and RNS.

ROS stands for Reactive Oxygen Species, and, as the name suggests are a group of unstable molecules which contain oxygen.

Superoxide – This radical is produced in abundance in cells as a by-product of energy production, and so cells (like muscle cells) which require more energy will produce more of this radical. It’s relativity stable, but can transverse the cell membrane which increases the number of potential oxidative targets. Despite being relatively stable, the abundance in which it is produced and its ability readily react with NO (see the RNS section below) and proteins mean it does pose a serious risk, and so the body produces a specialised enzyme called superoxide dismutase (SOD) which will rapidly breakdown superoxide into hydrogen peroxide.

Hydrogen Peroxide – The primary source of this radical is from the superoxide radical, and as its production is directly related to the amount of superoxide, the production of this radical will also increase when exercising. It is relatively stable, but its primary source of cytotoxicity is by the formation of the hydroxyl radical, which mainly occurs through copper or iron dependant reactions.

RNS stands for Reactive Nitrogen Species, and behaves similar to ROS in that they are reactive molecules which can cause damage our our cells.

Nitric Oxide (NO) –  Nitric oxide has a number of roles in a cell, and is created by an enzyme called nitric oxide synthase. In muscle cells, nitric oxide’s primary role is the formation of cGMP which is needed in muscle contraction. In Addition to this nitric oxide can also act as a vasodilator, which will help improve blood flow (and so nutrient flow) to the exercising muscles. Nitric oxide will also react with the aforementioned superoxide radical to form peroxynitrate. The reaction between superoxide and nitric oxide happens extremely rapidly, and even with superoxide dismutase present, the production of peroxynitrate is the primary product of superoxide in the presence of nitric oxide.

Peroxynitrate – This is an extremely reactive species which is associated with the damage of proteins and DNA.

There is plenty of evidence to show that nitric oxide can reduce the force produced from muscles, and as nitric oxide levels increases, so does the level of reduction2, 3, 4, effectively making muscles weaker. This is particularly interesting because nitric oxide supplements (usually in the form of L-arginine) are popular amongst bodybuilders for their ‘pump’ properties, which are a result of its ability to act as a vasodialtor. By artificially increasing nitric oxide levels before any muscle contractions have occurred you might actually reduce the over all performance of the workout. Perhaps all those ‘pump’ products which produce NO are a bad idea if you actually want to get the most out of your work out…

ROS seem to act a little different to nitric oxide with regards to performance. Research has shown that the presence of ROS such as superoxide has a positive effect on excitation-contraction in muscle cells. This has been extensively studied by Reid et al5 who have put together a theoretical graph of their findings: 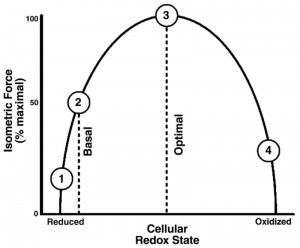 From the graph, you can see that taking antioxidants before exercise can reduce performance, whereas having moderate amounts of radicals present in the muscle actually can improve  performance to a point. Eventually the production of radicals from exercise will result in reduced muscle performance.

Indeed, there are numerous studies which support these finding that taking antioxidants, particularly vitamin C and vitamin E pre-exercise do not improve muscle performance6, 7, 8.

That being said, there is evidence that taking N-acetylcysteine (NAC) pre-exercise can improve performance by at least 15%5. This is thought to be due to its antioxidant properties and its ability to recycle an antioxidant called glutathione, which is a natural part of our immune response to exercise. Generally speaking, most antioxidants have a negative effect on performance, although NAC is an interesting case which I will come back to further on.

To say radicals are ‘good’ might to a stretch to say, but rather, they might be a necessary evil to achieve proper growth and recovery. Studies both in animals and humans have shown that a single isometric contraction (think doing the plank) increases the levels of the radicals mentioned above, but also increases the activity of muscle antioxidant defence enzymes such as SOD and catalase 9, and increases the expression of a number of cell signalling proteins such as NF-κB (which modulates the immune system) and MAPK (which, amongst other functions, regulates proliferation and growth10). Animal studies have shown that the administration of antioxidants pre-exercise inhibited the expression of a number of these genes.

These findings suggest that taking antioxidants pre-workout may prevent important cell signalling taking place. Some of these cell signals will be to protect the body from ROS and RNS (and so won’t necessarily be needed if you have just flushed your blood with a load of antioxidants), but some of these signals may by involved in growth/ repair – which are often the whole purpose of exercising, and so are needed.

An alternative to taking antioxidants

Something which occurred to me whilst writing this, is rather than trying to take the weight of your immune system by taking large amounts of vitamin C/ E (which doesn’t do any good anyway), it might be a good idea to feed the immune system instead. This way, the radical induced cell signalling can still take place, but the immune system is in ‘ship-shape’ and able to minimise the amount of radical damage. I think this is something NAC supplementation does in its ability to recycle glutathione (which if you remember has been shown to improve performance). I would expect that if you take immune supporting supplements, rather than immune system replacing supplements, you would experience the benefits of minimal radical damage, and radical induced cell signalling (and possibly even improved performance).

Due to the complexity, difficulty and variety of biomarkers you need to measure, there is no clear cut answer, and more research is certainly needed. However, from the current evidence it does look like your body is well equipped to defend itself from exercise induced radical production, and the radicals themselves play a role in this by triggering a number of cell signals. So I would say you don’t need to be taking any extra antioxidants when you exercise.

There is evidence that NAC can improve performance, so if you are not 100% comfortable with ‘going natural’ then I would suggest taking NAC over dietary antioxidants, because this can help improve performance as well as protect the body from oxidative damage. If you are a chronic cardiovascular exerciser, like a long distance runner or cycler, than NAC supplementation may well be a good idea for you due to the sheer volume of radicals you will be producing.

It’s also worth mentioning that if you are deficient in some of they key nutrients which the immune system uses (such as zinc) then your ability to neutralise the radicals produced will probably be reduced – so eat your nutrient rich plants and animals.