I was recently asked by a family member if evening primrose oil would can improve circulation. Certainly all manufacturers claim it does, but as most people know, there is...

I was recently asked by a family member if evening primrose oil would can improve circulation. Certainly all manufacturers claim it does, but as most people know, there is a big difference between what a product says it can do, and what it actually will do, especially in the poorly regulated health industry. So, lets have a look at the research on evening primrose oil, and see if it can improve circulation.

What’s in the oil?

GLA itself has no benefit to circulation though, and it needs to undergo further conversion into a compound called prostaglandin E1 (PGE1) (see diagram). It’s a long conversion from LA to PGE1, which will probably make the conversion inefficient, but we will discuss this in a bit more detail later.

Role of PGE1 in the body

Prostaglandins are are group of signalling chemicals which the body similar to hormones, which the body produces naturally. The have various roles in the body, and PGE1 is a known anti-inflammatory1 and vasodilatior2, both of which would help improve circulation. Inflammation causes blood vessels to constrict, which reduces blood flow, and so by reducing inflammation PGE1 will improve blood flow, and by dilating the blood vessels PGE1 will obviously improve blood flow – so on the surface it looks like evening primrose oil can improve circulation.

The body will also convert LA into pro-inflammatory prostaglandins (PGE2) which can counteract the anti-inflammatory benefits from PGE1, to some extent at least, and further suggests
that the conversion to PGE1 will be inefficient (see diagram). 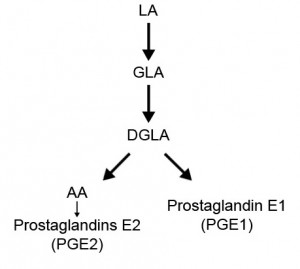 Furthermore, most Western diets are already high in omega-6 fatty acids, particularly AL which is found in many plant oils. Chances are, you are already getting enough AL, which can have problems of its own. The conversion of LA to GLA requires an enzyme which omega-3 fatty acids also need. This creates competition between the 2 fatty acid groups for this enzyme (which again, suggests the conversion of LA to PGE1 is poor). If you have too much omega-6 in your diet, the omega-3 fatty acid alpha-linoleic acid (ALA) cannot be converted into the very important EPA and DHA, both of which are anti-inflammatory.

Finally, there are no clinical trials testing how much PGE1 will be created from taking evening primrose oil, or testing the circulatory improvements the oil is claimed to exert.

Although evening primrose oil will be converted into PGE1, which in theory should improve circulation, there are other factors you need to consider. The conversion to PGE1 is going to be pretty poor, evening primrose oil can produce pro-inflammatory chemicals, it will inhibit the production of important anti-inflammatory omega-3 fatty acids, and you will only be adding more omega-6 into your diet, which, chances are, you already have enough (or even too much).

If you do have poor circulation, you would be better off trying to increase your omega-3 fatty acids, keeping well hydrated and trying to find other ways to tackle circulation problem. Exercising for one, is a good way to strengthen your circulatory system – so maybe give that a go. Stress is also a cause for poor circulation, so if work or your home life are making you feel stressed, you may want to try and tackle the stress.

2. Ney P. (1995). Vasodilator effects of PGE1 in the coronary and systemic circulation of the rat are mediated by ATP-sensitive potassium (K+) channels. Agents Actions Suppl. 45, 71-6.