It has recently been announced that a new food labelling system is being planned to be introduced to the UK with the aim of helping people be more aware of what... 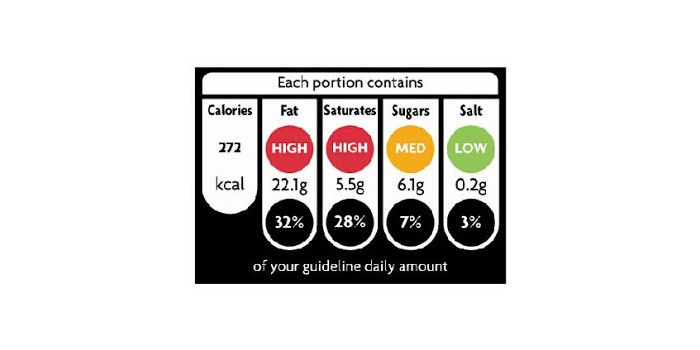 It has recently been announced that a new food labelling system is being planned to be introduced to the UK with the aim of helping people be more aware of what goes in the food. This new system will have the traffic light system (which some manufacturers already have implemented), and will be uniform across all foods to minimize any confusion. An example of the traffic light labelling system which is being used by a manufacturer can be seen above. This brings me back to the debate that I had in a lecture at university when the traffic light system was first considered.

From the image above, it is clear that the fat content is a high percentage (saturates are high too), sugars are an acceptable level and salt is pretty low. The problem is there is not enough information there.

Many fish are very high in the essential fatty acid  omega-3, this level of fat would most probably result in oily fish being labelled as ‘high’ for fat, which would obviously put many people off the fish.

A lot of fruits and some vegetables are high in sugars (fructose mainly), and so their sugar rating will also be ‘high’, however, there is no mention of the micro-nutrient content of these foods.

Manufacturers have an incredible budget for research and development, and because this system is so very basic it is asking to be abused. Without even giving it much thought I realised that manufacturers could lower the recommended serving size to ensure that the sugar is in the green, but the serving size will make no difference to most people; who is only going to eat half a bag of crisps? Manufacturers could also add more artificial sweeteners (such as sucralose) to their products, which would effectively give a product no sugar, and would look healthy, when in reality, it could be worse than actually having sugar!

Benefits Of The Traffic Light System

There is a reason for using this system though. I understand that not everyone is as knowledgeable with nutrition as I am, and that many people do not want to read a detailed micro-nutrient break down. It does provide a quick insight into the food’s make up, which may encourage people to change their mind.

Despite giving a quick insight, I believe the traffic light system is far to vulnerable. The results can be manipulated with relative ease and can misguide the public. There is also the risk that some healthy foods are going to be labelled in a negative way which could put people off them. I would personally move towards a more detailed breakdown and more education in the health sector. Having said this, I do think things are moving in the right direction in getting a blanket labelling system in place, just perhaps not this labelling system.