Cinnamon is a spice which is obtained from the bark of trees belonging to the Cinnamomum genus of plants, although true cinnamon is actually a specific species called Cinnamomum verum, or Ceylon cinnamon, which is a small plant from Sri Lanka. All species which belong the the Cinnamomum genus are the only source of a type of tannin called cinnamtannin B1, as well as a number of other unique phenolic compounds. It is these phenolic compounds, cinnamtannin B1 in particular, which are responsible for the effects that cinnamon has on the body. This article will explore the research and explain what the health benefits of cinnamon are.

Cinnamon is best known for its benefits in helping the body regulate blood sugar, and so can be very beneficial for those with type 2 diabetes, those at risk of developing diabetes or anyone who follows a typical Western diet which is high in sugar. It is the tannin cinnamtannin B1 which is responsible for this effect, because it mimics the action of insulin in the body.1 By doing this, cinnamon supports our natural blood sugar regulation system and reduces the stress that high sugar diets put on our body. Type 2 diabetes results from an inability to produce insulin, often as a result of high sugar diets causing too much demand on the beta cells (the cells which produce insulin) which eventually destroying them. The consumption of cinnamon will help support this system, reduce the amount of insulin required to normalize blood sugar, and reduce stress on the beta cells. This can prevent, or at least delay, the development of type 2 diabetes. Cinnamon will also be beneficial for those who already suffer for type 2 diabetes, as it will, to some extent, help regulate the blood sugar in the same way as insulin. 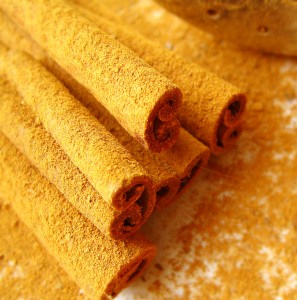 These benefits have been shown in a number of human studies, and it has been shown that consumption of 1-6g of cinnamon over a 40 day period can reduce fasting glucose by 18%-29%2, which is a very significant amount for type 2 diabetics or pre-diabetics. It has also been observed that 1g of cinnamon was comparable to oral medications available for diabetes in its blood glucose lowering abilities3, and is also more effective than making dietary changes alone. As cinnamon consumption has no known side effects, it may be a much more favourable and healthier alternative to some medications for controlling blood sugar.

Investigations into the benefits of cinnamon on people suffering from type 1 diabetes have shown that no benefit in regulating blood sugar levels4, and so currently, it is not recommended to consider cinnamon as a treatment for type 1 diabetes.

Other possible benefits of cinnamon

There is evidence that consumption of cinnamon can increase lean body mass, reduce body fat, protect against Alzhiemer’s disease, reduce inflammation and help fight pathogens in the digestive system. Although there is some clinical evidence supporting these claims, it is uncertain if consuming cinnamon will offer any significant benefit, and more research is needed investigating these potential benefits.

How to get more cinnamon in your diet

I’ve been asked how is best to get more cinnamon in your diet a couple of times, so decided to add this section in.

Sadly, it is very difficult to get cinnamon into your diet regularly, and in a significant quantity for you to benefit. You can try sprinkling it on your breakfast, putting it in a smoothie or even try it in your tea or coffee (it does not dissolve though). These things provide your diet with small amounts of cinnamon, and although its better than nothing, it probably isn’t enough to impact your health in any measurable way. Chances are, you will also be sick of the taste of cinnamon after a week or so anyway… This means that the best way to get cinnamon into your diet is with a cinnamon supplement. I know food is always better than supplements, but sometimes practicality simply makes supplements better – just don’t replace all your food with them!

There is substantial clinical evidence which shows that cinnamon can help the body control and regulate blood sugar significantly. This is of particular importance for those at risk of developing diabetes, or those who already have diabetes. This is achieved by the insulin mimicking action of cinnamtannin B1, which is only found in cinnamon, and consumption of cinnamon may be able to delay or prevent the development of type 2 diabetes.

Cinnamon has also demonstrated cardio-protective properties, by lowering LDL cholesterol levels and helping to protect the body from oxidative stress. With cardiovascular disease on the rise this is very important, and also offers an additional benefit to type 2 diabetes sufferers who are at an increased risk of cardiovascular disease.

Other benefits of cinnamon have been identified, but more research is needed to asses the extent and reliability of these benefits.

6) Anne-Marie Roussel PhD. (2009). Antioxidant Effects of a Cinnamon Extract in People with Impaired Fasting Glucose That Are Overweight or Obese. Journal of the American College of Nutrition. 28 (1), 16-21.