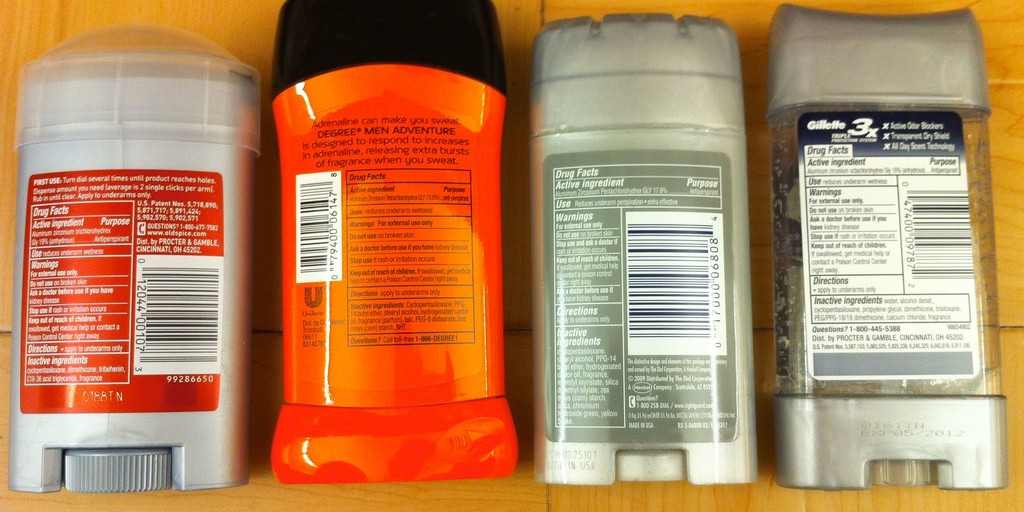 We use deodorants or antiperspirants everyday out of habit, most people don’t even think about what they are doing – it is simply an inbuilt part of our morning...
by Craig Elding July 31, 2013

We use deodorants or antiperspirants everyday out of habit, most people don’t even think about what they are doing – it is simply an inbuilt part of our morning routine. However, can the regular application of chemicals to our skin be healthy, and if not, is there a healthy alternative? This article will investigate what causes this odour in the first place, the health implications of these sprays, and explore any alternatives for controlling body odour.

What causes us to smell?

It is common belief that body odor is a the smell of our sweat, which is not actually true. Perspiration is actually more or less orderless. The smell is caused by bacteria, which are able to metabolize our sweat on grow. The armpits tend to be a strong source of smell because they are one of the only parts of the skin which remain in a consistently warm temperature making it an ideal environment for bacteria growth. Interestingly, washing ourselves with soap allows bacteria to grow, because the use of soap raises the skins natural pH making it more neutral, which allows bacteria to grow on our skin. All these factors make the underarm the ideal place for bacteria to grow, and produce the smell.

The terms are interchangeable, but they are actually 2 distinct products. Antiperspirants simply prevent the body producing sweat, which prevents bacteria growing. The most common way of preventing sweat is the use of aluminium based compounds, such as aluminium chloride and aluminium chlorohydrate, which work by forming a gel like plug in our pores which blocks sweat from coming out. Deodorants simply mask the smell with a stronger and more pleasant smell, but now often contain antiperspirant chemicals in them as well, which is why the terms are often interchangeable.

The primary concern is that aluminium based compounds can be absorbed through the skin, which can then interact with our cells. In the early 2000’s a number of clinical studies showed an increase in the number of breast cancer cases in the upper outer quadrant of the breast (i.e. next to the armpit where antiperspirants are sprayed). This triggered an increased amount of research into aluminium interactions in the body. These studies have conclusively shown that aluminium is absorbed by the skin, where it can alter the microenvironment in the surrounding tissue. Aluminium is known to be genotoxic, which causes genetic damage consistent with the mutations associated with breast cancer. Furthermore, there is evidence to show that aluminium, particularly aluminium chloride and aluminium chlorhydrate, alter the oestrogen receptors in the breast, which again, increases the risk of breast cancer. There is still some debate about how much is absorbed by the skin, and what safe dosages are considered, but there is no doubt that aluminium is absorbed by the skin, and does cause genetic damage.

Another chemical group which is causing health concern is a group called phthalates, particularly diethyl phthalate and dibutyl phthalate, which are used to dissolve perfume compounds in. There is evidence to show that these phthalates disrupt the endocrine system and are absorbed through the skin, and are even detectable in urine. This shows that phthalates can also increase the risk of breast cancer, but the evidence on this is much more limited compared to that of aluminium.

The third compound which has caused concern are parabens, which are a group of antibacterial chemicals. Animal studies have shown that there compounds are non-toxic, but it is widely accepted that they are absorbed by the skin. There is growing evidence to show that these compounds are able to mildly mimic the action of oestrogen in the body. This is of particular importance in breast tissue, as it is known that increased activity of oestrogen in the breast leads increases the risk of developing breast cancer. Although to date there is no cause and effect relationship established between parabens and breast cancer, the fact that parabens is absorbed by the skin and does mimic the action of oestrogen strongly suggests that it may contribute to an increased risk.

Since the rise in awareness of the risks of the chemicals in deodorants, alternative have been developed. A common alternative is a mineral compounds called alum, which is hydrated potassium aluminium sulfate (potassium alum). Alum is a mineral compound, often in the form of potassium alum, and is found in a crystal form (some deodorants which contain this compound are called crystal deodorants). Alum has demonstrated antiperspirant and deodorant properties which makes it a popular alternative to conventional deodorants. Alum can be used in deodorants to replace conventional aluminium compounds and parabens, and these alternative deodorants are often orderless which eliminates the need for phthalates. The aluminium found in these deoderants are not absorbed by the skin, and there is no indication that it can increase this risk of cancer. Currently there is no toxic properties of alum identified, and it is considered a safe alternative to conventional antiperspirants/ deodorants.

Body odour is caused by bacteria metabolising our sweat, and our armpits provide the ideal environment for these bacteria to thrive, and so produce the most smell. Deodorants and antiperspirants are designed to block the pores in our skin which inhibits bacteria growth and/ or covering up the smell with a more pleasant smell. There is vast amounts of evidence which show that conventional deodorants/ antiperspirants do increase the risk of developing breast cancer, which is a large risk for women, but also a concern for men. These compounds may also contribute to the development of other cancers, but this has not been confirmed. Aluminium and phthalates are known to increase the risk of cancer, and parabens are likely to increase the risk. Collectively, these compounds can cause genetic damage and make alterations to the endocrine system. Alternatives for these chemicals include forms of aluminium, particularly potassium alum, which has not been shown to have any toxic properties, and is effective at controlling body odour.