Despite everyone’s best efforts to be healthy, a takeaway will still feel like a naughty treat on a Friday night, or a convenient meal after a busy day. You...

Despite everyone’s best efforts to be healthy, a takeaway will still feel like a naughty treat on a Friday night, or a convenient meal after a busy day. You want to let your hair down, but you also don’t want to go so over the top with sauces and sides which will turn you into a guilt ridden sofa slug for the rest of the evening. Here is the good and the bad of the takeaway world to help you pick a tasty but healthy takeaway. 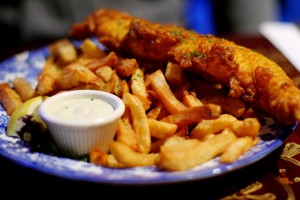 As deliciously salty chippy chips are, the amount of oil used to cook everything makes anything from a chip shop a bad choice. You might not get the same sugar crash that you will get from other takeaways, but you will be left feeling very greasy. There isn’t a remotely healthy option at a fish & chip shop, from the Pukka Pies to the battered sausage, it’s all swimming in oil and covered with salt. I even doubt there will be any quality nutrition left in the cod once it has been deep fried old oxidised oil. In addition to this, the only thing which resembles a vegetable are mushy peas, which are nothing to get excited about.

Unless you have a real craving for chippy chips (which you know you will regret once you have eaten), I would avoid going go a fish & chip shop. 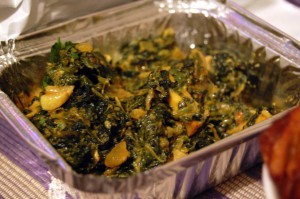 An Indian takeaway is not as clear cut as a chip shop because you do have more choice here:

Papadums – These don’t really contain much sugar, and a large amount of the carbs in it are fibre. A couple of these are going to do you no harm at all.

Naan bread – These are usually massive in size and could be a meal in their own right! Even half a naan bread will flood your system with around 40g or sugar. To give you an idea of what just this naan will do to your system, have a look at the blood sugar graph to the right. Fasting blood sugar is usually around 4 – 5.9 mmol/L, and this is generally where the body likes to have its blood sugar. After a meal it will raise a little, but with a high carb meal (like a curry with a naan) you could easily raise your blood sugar to twice the desired amount. This is always followed by the sugar crash, where you feel like you have no energy turning you into the aforementioned sofa slug. So, avoid a naan bread if you can, or at least share it.

Rice – Rice sides are little better than a naan, but also contain large amounts of simple carbs, which will have a similar effect on blood sugar. You can often get rice sides mixed with some veggies or fried eggs which will slow the digestion process. I would pick rice (with veggies/ egg) over a naan, and share the serving!

Saucy Curry (madrass, korma etc) – Saucy curries tend to be a bit higher in calories than other curries, and this is mainly due to the oil that is used (which is needed to carry some of those fantastic flavours). Traditionally, ghee is used in making Indian curries which provides some good fats, but many takeaway curries will use sunflower oil or vegetable oil instead, which is not as healthy. Usually restaurants will use ghee, so if you know a restaurant which also does takeaway food, there is a good chance that they will use ghee to cook with. You might not be so lucky with a cheap takeaway.

Sauces will often contain some sugar, but lets not forget, this is a treat, and nothing will be nutritionally perfect. If you chose not to have a naan, go for some sauce!

Dry curry/ sauce-less meat (tandoori, byriani etc) – These meals are typically lower in calories, and as byrianis already come with rice you probably won’t want a side with them. Meals like chicken tikka or tandoori chicken are pretty low in carbs and high in protein which will prevent sugar spikes.

An Indian takeaway is typically quite good, as the recipes use a variety of herbs and spices (more than other takeaways) which have a variety of health benefits and they often come with some vegetables.

Want a healthy Indian? My pick is a couple of papadums with various dips, followed by a dry meal such as chicken tikka with some egg fried rice. Don’t be afraid of having a saucy curry though, but do try and buy it from a restaurant to get the better ingredients. 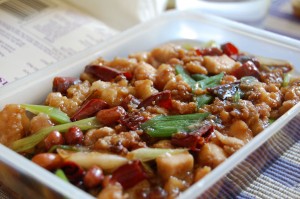 Traditional Chinese cuisine is quite high in vegetables rice and meat, and would make quite a healthy choice. However, the takeaways often deep fry foods and have them laced in sugary sauces, so a Chinese takeaway is not always healthy.

Prawn crackers – These are essentially deep-fried starch, with prawn flavouring. Not a good choice by any means, so try and limit your intake of these.

Battered foods – Lots of food in a Chinese takeaway is made in the deep fat fryer, and so avoid anything with batter on and spring rolls.

Saucy foods – Whilst sauces from a Chinese takeaway are not as bad as the battered foods, they will often contain flour, sugar, soy sauce and probably lots of monosodium glutamate (MSG).

If you want a healthy Chinese takeaway, avoid prawn crackers, battered foods and sauce if possible, and try and find a place which cooked food in more of a traditional way. It is best to go for a simple meat and vegetable dish like beef and green peppers or chicken and bamboo shoots. 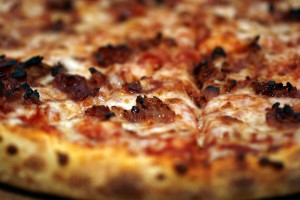 Pizzas are loaded up with carbs and salt, with some containing up to 30g of carbs and around 1g of salt per slice! Adding a couple of peppers on top isn’t going to make much difference no matter how much you kid yourself it will. If you want to have a healthier pizza, its best to avoid BBQ sauces and crusts stuffed with anything, and go for the thinner crust options to try and minimise your carb intake. 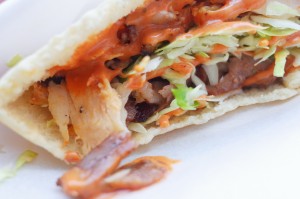 A Kebab is the kind of takeaway you get when you’ve had a couple of drinks, and in your happy tipsy state (or possibly a bit worse) you think “man, I could really do with a kebab!”. In this fluffy and cloudy mind set, health is often the last thing on your mind, but arguably, it is after you have had a few drinks that healthy food is the most important. If you are looking for a healthy kebab option, go for a shish kebab, as this usually good chunks of meat. Try and avoid the doner meat though, as this is highly processed and packed with ‘bad’ fats (and lets be honest, it isn’t as nice).

The meat is the most important choice when picking a healthy kebab, not the salad. A few old leaves of lettuce aren’t going to make much of an impact on your health in comparison to the choice between lean shish meat, and greasy donner meat.

A kebab is a meal of macro-nutrients, not micro-nutrients. You can avoid the bad fats and high salt content that come with fish & chips or a pizza, but the lack of herbs, spices and vegetables make it a less healthy option than some Chinese or Indian takeaway meals.

If you want to make a kebab as healthy as possible, go for shish meat, salad and no sauce – this way it is kind of like a chicken sandwich, which in the scheme of things is pretty healthy. As soon as you add the sauce or doner meat, it becomes real bad for you though.

What is the healthiest takeaway?

Without a doubt, fish & chips are the most unhealthy, which is then closely followed by a pizza and a kebab. Chinese and Indian takeaways are not as clear because of the variety of possible ingredients, recipes and cooking styles; but as a whole, I personally think that an Indian takeaway is more likely to be a healthier choice than a Chinese. There are good options for both though, and it depends largely on the place you buy from, and meal you chose.