How to Improve your Circulation

Poor circulation is a growing problem in modern society, especially for those who have a desk job and are not very active. The effects of poor circulation are most...

Poor circulation is a growing problem in modern society, especially for those who have a desk job and are not very active. The effects of poor circulation are most noticeable on the extremities of the body such as hands and feet which can feel cold (even in warm weather). In extreme circumstances poor circulation to your hands and feet can lead to the development of chilblains which is characterised by red, swollen, and itchy parts of the hands/ feet. This occurs because not enough blood (which regulates and transports heat throughout the body) can reach these parts of the body. Unlike most common ailments, there is no pharmaceutical treatment for chilblains (although a number of creams claim to help, but these lack any clinical evidence). This article will investigate how you can help improve your circulation through dietary and lifestyle changes, which will help combat chilblains and other problems associated with poor circulation. 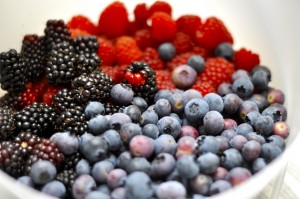 Causing veins/ arteries to dilate will help the flow of blood throughout the body, and this is a process is called vasodilation, or vasorelaxation. Flavinoids, which are a sub-group of non-essential nutrients called polyphenols, have demonstrated vasodilatory properties, both in animal and human studies. These flavinoids work by increasing the production of a natural vasodilator called nitric oxide (NO) in smooth muscle 1, which causes them to relax and widen. This will help to improve your circulation; but smooth muscle cells are only abundant in arteries, with much less present in veins and none in capillaries. This means that the vasodilatory properties will only be seen in arteries (which carries blood away from the heart), which will limit the improvement in circulation.

Flavinoids are all plant derived, and are particularly high in berries and other brightly coloured fruits/ vegetables. A flavinoid called quercetin (which is most abundant in onions, kale, broccoli, apples and various berries) was found to be especially effective at stimulating nitric oxide production in smooth muscle cells in animals, but human trials have not confirmed this2.

Aside from flavinoids, a common amino acid called arginine has also been shown to stimulate nitric oxide production in smooth muscle cells3. Arginine is abundant in most protein sources from both plants and animals. In relation to the amount of other amino acids though, arginine is particularly high in nuts/ seeds and spinach. Other amino acids have not been shown to have the same effect on nitric oxide production.

Improving heart strength by exercising will improve blood flow throughout the body, enabling more blood to reach your extremities. Exercising will also increase your metabolism which generates heat, which will help to keep your extremities warm and stimulates vasodilaton for both veins and arteries – helping to further increase blood flow throughout the body. Although exercising does seem to have its obvious benefits for improving circulation, it does have its draw backs.

Adrenaline, a hormone which is produced during exercise has a number of effects on the body. When you are exercising (or even thinking about exercising) adrenaline is released in the body, and although it improves the efficiency of the cardiorespiratory system, it diverts blood away from extremities and the digestive system to muscles4 as part of the fight or flight mechanism. This means that although your heart will be pumping harder, the arteries supplying the extremities will constrict – reducing blood flow to them. It is possible that the long term benefits of strengthening your cardiovascular system will outweigh the short term vasoconstrictive effects in hands and feet which occur from exercising, but there is are no clinical trials to confirm this.

To try and combat the vascoconstrictive effect of adrenaline, but still benefit from the strengthened cardiovascular system you can exercise indoors where in warmth. Exercising in a warm environment will help dilate the veins and capillaries, and will also help combat the vasoconstriction from adrenaline and also fight the cold feeling in hand and feet. Fortunately there are a variety of options for indoor exercising, ranging from using machines in a gym, to doing home work-outs such as zumba.

Stress also triggers the fight and flight mechanism, and so also causes adrenaline to be produced. Without the increase in heart rate you get from exercising, this can really reduce blood flow to your extremities. Finding and combating sources of stress may also have some benefit to combat bad circulation to your feet and hands.

Where there is an ailment, there is always a supplement which  is claimed to cure it. Circulation is no different, and there are a number of supplements which claim to help improve circulation. I’d be a bit sceptical of these personally, I recently looked into evenings primrose oils effects on circulation (which is the most popular supplement for improving circulation) and the research at best is inconclusive. I’d steer clear of these, and try exercising first.

Poor circulation is most noticeable in the extremities of the body such as the hands and feet which can feel cold. This problem is exasperated by inactivity, which is becoming more and more common in modern society. To try and combat this, a number of foods have been shown to help increase circulation by stimulating nitric oxide production in the smooth muscle cells, which are most abundant in arteries. These foods include berries and brightly coloured fruits/ vegetables as well as protein sources.

Exercising will also help improve circulation, but the adrenaline which is produced from exercise will constrict the blood vessels to the extremities. It is because of this that it is advisable to try and exercise in a warm environment to minimise the feeling of cold in hands and feet, which will help protect against chilblanes.