On the surface, earthing sounds like hippy mumbo-jumbo and vague pseudo-science nonsense – ‘touching the ground to neutralise the positive charge our body gets from our daily lives‘ –...

On the surface, earthing sounds like hippy mumbo-jumbo and vague pseudo-science nonsense – ‘touching the ground to neutralise the positive charge our body gets from our daily lives‘ – what does that really mean? I was sceptical at first, but after researching it, it does seem like there might be something to it after all. This post will explain why people practice earthing, and look at the current scientific evidence – is there any benefit to earthing?

Earthing is simply the practice of touching the ground with your skin. It also counts as ‘earthing’ if you go swimming but it is ideally done in a natural body of water like the sea or a lake, not a swimming pool.

why? – Early man would have walked around bare foot all day, and many people believe that the healthiest thing to do is mimic the life of early man (within reason). This contact with the ground is thought offer a benefit to the body which we have evolved with, and need to be healthy. By touching the ground it is thought you discharge any positive charge we get from our day-to-day lives, in a similar way electrical circuits need to be earthed. By wearing shoes which are not conductive, we are unable to discharge any charge which, in theory, can build up and damage the body. Earthing reconnects your body with the ground, and removes any positive charge.

Is there any proof this benefits you? 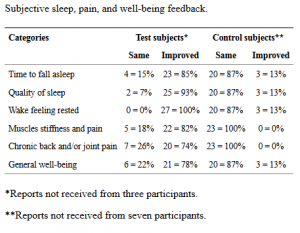 The theories – Most radicals in our body are positively charged, which would give the body a positive voltage (this is similar to building up static). Not being able to discharge this may increase the amount of radical damage our body undergoes. Whilst this does make some sense, there is no actual evidence that touching the ground with our skin will have this effect or reducing damage to the body, and so this theory is untested.

The studies – One blinded study with 60 participants tested chronic pain and sleeping problems. The participants were randomly assigned into test or control group, and the participants were unaware of which group they were in, or if the bed they slept in was grounded or not. The majority of the control subjects reported no improvement, whereas the test subjects noted significant improvements in sleep, reduction in chronic pain and even reported relief from respiratory conditions (such as asthma) and arthritis.

and so knew when they were sleeping grounded and why they were not. This does open up the possibility of the placebo effect, and although cortisol levels are not subject to placebo bias in the same way the previous study would have been if it wasn’t blind, it doesn’t eliminate it, and so the results may just be a placebo. Still, the results are eye opening. (you can click the image to enlarge)

The anecdotes – There is a vast amounts of anecdotal evidence where people have tried earthing and claim it has cured everything from joint pains, to sleeping problems and even ingrown toe nails! If you were to believe all the anecdotal evidence I have read you would think that earthing is a real miracle maker, but it’s always a good idea to take anecdotal evidence with a heavy pinch of salt. There is often a small nugget of truth in in these stories, but anecdotal evidence is very susceptible to placebo bias. All these stories about earthing healing people are from people who are trying earthing because they are expecting it to heal them. They believe the scant evidence that is available, and when they try it they expect to sleep better, or expect to have reduced joint pain – but is this really a problem if it does help people?

There is limited, but positive studies on the benefits of earthing, more than I was expecting when I first heard about it, but not enough to convince me outright that it can cure all these ailments. The theory is simple, but lacks any actual supporting evidence. The few studies on earthing are small and one is particularly vulnerable to the placebo effect which limits the validity of its findings; but the only studies available are positive, and do show a benefit to earthing.

I’m not convinced of the extent of the benefits of earthing, but I must admit, I do enjoy the feeling of the grass on my feet. I had never given it much thought before, but now I will make a little more effort to make contact with the ground. Next time my phone rings I might go outside to answer it and have the conversation with my feet on the ground – discharging any possible positive charge. I probably won’t go out of my way to make contact with the ground, and I certainly won’t be buying the expensive earthing equipment, but I will try and walk bare-feet outside when I can. I mean, what is the worst than can happen from it? The grass feels nice, and it will do me no harm, and may possibly do me some good.

So what do you think? Have you tried earthing and seen any benefits, or are you too sceptical to give it a go? Let me know in the comments below.