We decided to get a coconut oil in stock for The Health Cloud shop last week (largely because I wanted to get some for myself to be honest). It...

We decided to get a coconut oil in stock for The Health Cloud shop last week (largely because I wanted to get some for myself to be honest). It has been a while since I had eaten coconut oil, it is surprisingly hard to get your hands on a good one (cold pressed and organic) in the UK!

Anyway, we got some of the unlabelled product in last week, and I obviously instantly bought a jar for myself – one of the advantages of my job 🙂 When I got home I really wanted to cook with it, so I decided the best thing to do was make a curry. Now, I like to think I make a pretty mean curry as it is, but the coconut oil made it taste incredible! If there was some way to show you how much difference the coconut oil made I would, but a picture wouldn’t cut it, and other than cooking a meal for everyone, I couldn’t think of a way… 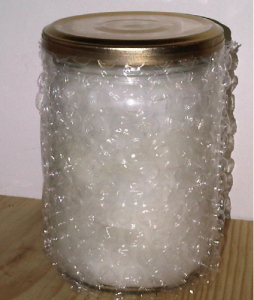 The next day I went for a run, but before I had a banana. I like bananas, but they can be a bit boring. So, I decided to put some coconut oil on it. Now, because it is so cold at the moment the coconut oil is solid, so I sort of had to spread the coconut oil onto the banana, it was quite strange to do, but it made the banana taste amazing!

The actual taste is quite subtle, certainly not overwhelming, but even in a curry you can still notice the taste amongst all the other flavours. I love it.

But why am I eating so much coconut oil? Well, other than the taste, it is pretty amazing stuff:

These are not abundant in nature, but you can get them in various milks, but coconut oil is really the best source of them. MCTs are great for the cardiovascular system, and have been shown reduce ‘bad’ cholesterol and increase ‘good’ cholesterol.

My favourite thing about MCTs is that they are such a great source of energy for the body. MCTs are passively absorbed in the digestive system, and can pass through the mitochondrial membrane (the ‘power stations’ of the body) without the need of other chemicals. This means they can quickly be made into ATP (the chemical which the body uses for energy). So coconut oil is a great source of sustainable energy, without the problem of insulin spikes, sugar rushes, sugar crashes and body fat gain, all of which you will get from sugars.

Coconut oil is the best natural source of lauric acid. I have uploaded bellow the fatty acid break down of the coconut oil we will be selling soon, and you can see that lauric acid makes up over half of all the fatty acids in it! 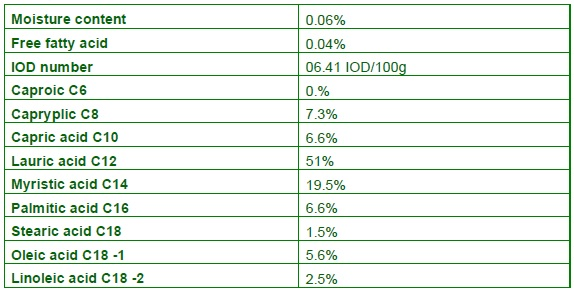 The body converts lauric acid into a substance called monolaurin, which has demonstrated powerful antiviral properties (even against the influenza virus), anti-bacterial (particularly against gram-negative bacteria, which include Salmonella) and anti-fungal. Monolaurin also can promote the activity of immune cells – making it a great all round health booster, particularly in the digestive system.