Both coconut oil and olive oil are both plant derived oils that are hailed for their many benefits. Both are certainly healthy, and we have discussed how they compare...

Both coconut oil and olive oil are both plant derived oils that are hailed for their many benefits. Both are certainly healthy, and we have discussed how they compare nutritionally and when to use them in cooking here. Consumption aside, both oils are known for their nourishing properties on the skin. Despite both being plant based oils, their fat and micro-nutrient profiles are distinctly different, and so it this article I’ll discuss how the two compare for skin health, and look at the supporting research.

Clinical trials have shown that coconut oil is as effective as mineral oils (conventional moisturisers) when it comes to moisturising the skin1. This arguably would mean that coconut oil is better than conventional moisturisers as it doesn’t contain any chemicals that conventional skin products do, which are not healthy. This particular study was a randomised double-blind controlled trial, which is considered the ‘gold standard’ in research. Other research also supports this study’s findings, and there is a vast amount of anecdotal evidence also supporting these claims. You just need to see the vast number beauty blogs promoting coconut oil as a moisturiser to see how popular it is.

Olive oil is not as well researched as coconut oil for moisturising skin. It has been tested in moisturising ‘blends’, but these blends also contain other ingredients which are also thought to have moisturising properties such as aloe vera2. This makes comparison very difficult. Additionally, there is very little anecdotal evidence showing olive oil is a good moisturiser.

Protecting the skin against bacteria & infection

Skin problems such as acne are strongly linked to bacteria on the skin3 (but diet/ hormones also have a role important too). A good skin care product needs to help control bacteria, and also help the healing of wounds and sores to prevent infection.

About 50% of coconut oil is a fatty acid called lauric acid, which has been shown to have quite strong antibacterial activity against a broad range of bacteria4. Additionally, coconut oil has been shown to increase skin healing and increase antioxidant enzymes in the skin5, which will help fight of and prevent infection. Its ability to improve healing and improve enzymes is attributed to micro-nutrients found in the oil such as vitamin E, and not the oil itself.

Olive oil has also demonstrated strong antibacterial activity, although there isn’t a great deal of research testing this on skin. Olive oil can inhibit a number of foodborne pathogens, and its ability to do this is thought to be due to the variety of phenolic compounds it contains. Phenolic compounds are well known for their antibacterial properties, and are the reason why ingredients like green tea are found in natural antibacterial creams. Olive oil has also been shown to improve healing (specifically in ulcers) and reduce inflammation at sites of damage on the skin6. Again, this is attributed, at least in part, to the phenolic compounds found in olive oil, although some of the fats in olive oil are also known anti-inflammatories. 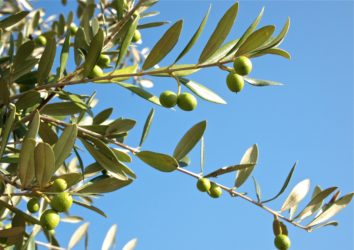 Both olive oil and coconut oil seem to have meaningful antibacterial properties. However, when compared for antibacterial activity when applied to the skin, coconut oil appears to be the more powerful. A double-blind controlled trial tested the 2 oils against Staphylococcus aureus bacteria on the skin. After 4 weeks only 5% of the subjects who used coconut oil were positive for Staphylococcus aureus, whereas 50% of the olive oil users were positive7.

The evidence points to coconut oil being the stronger of the two oils when looking at protecting the skin from bacteria/ infection. Both oils have also been shown to help the skin heal, but without a good comparative study, it has hard to say which is better than the other. Interestingly, these oils seem to help skin healing in different ways, and may complement each other. A combination of coconut and olive oil might have greater healing potential than either oil in isolation, but sadly this hasn’t been tested.

Improving skin health and ‘youthful’ features is possibly one of the most desirable properties of skin creams. Moisturising/ protecting the skin as discussed above is a key part to improving skin health (and so youthful looks), but that’s not the whole story.

Collagen is a protein found in skin, and it gives skin its elastic properties and a smooth ‘plumped’ look. There is some evidence that coconut oil can increase collagen production in the skin5, but there isn’t a great deal of research on this.

Olive oil is also commonly used as an after-sun treatment to reduce damage from prolonged exposure to the sun. This is supported by quite a bit of research. There are studies which show that regularly treating your skin with olive oil protects it from damage9, and applying it after spending time in the sun reduces oxidative damage to the skin10. This again may be more down to the phenolic compounds that it contains. Both coconut oil and olive oil have been shown to block about 20% of UVB rays from the sun11, which shows they have comparable preventative effects, although olive oil is seems to be the better after-sun treatment, and has better protective effects.

Both oils are very good for skin health. On the whole, coconut oil appears to be better at causing collagen production (and so improving skin appearance), and olive oil is better at protecting the skin from sun damage.

Both olive oil and coconut oil are good for your skin, and benefit it in different ways. On balance, it looks like coconut oil is better at moisturising, controlling bacteria, and improving skin health than olive oil. However, olive oil is a stronger antioxidant, and so is a more effective treatment for sunburn.