Organic is often marketed as being a natural and healthier alternative to conventionally farmed foods, but it also comes at a price. Studies are very controversial on the subject,...

Organic is often marketed as being a natural and healthier alternative to conventionally farmed foods, but it also comes at a price. Studies are very controversial on the subject, and there are ulterior motives behind a number of studies both for and against organic farming, which makes it very hard to make an accurate decision. This article will focus on organic vs conventional farming and food, explain what is required to become ‘organic’ and the difference in the organic and non-organic produce.

What is organic farming?

Organic farming is defined as farming which uses no artificial fertilizers, no genetically modified crops, no routine drugs (such as antibiotics) and a severely limited amount of pesticides (often no pesticides can be used with a few extreme exceptions). Instead, organic farmers use crop rotation and manure to fertilize their crops, use natural seeds, try and prevent disease (although antibiotics can be used if an animal gets ill) and encourage natural predators of pests onto the crops. The purpose of organic farming is to provide environmentally and healthy foods.

Conventional farming is the opposite, the same crop is often grown in the same field year after year, artificial chemicals are used to fertilize the crop and kill pests, antibiotics may be a regular part of livestock diets, and both the livestocks food and crops may be genetically modified. The reason conventional farming has developed this way is to feed a growing population in an affordable way on the same amount of land.

Pesticides – These are chemicals which have a high toxicity to target species, but may also be toxic, to a various degree, to non-target species, including human beings, and crops are sprayed with them to prevent loss of crop yield. These pesticides residues often stay on the crop and are consumed when the food is eaten. There are a vast number of pesticides which are used world wide, and governments in the developed world recognize that for the majority of them it is not a matter of if a pesticide is toxic, it is a matter of how toxic a pesticide is for humans. In America, the government has created a hazard scale where it ranks the severity of a pesticide based on frequency of use, effects on the nervous system, effects on the endocrine system and its carcinogenic properties. Many pesticides are also linked with the development of Parkinson’s disease, and birth defects. In developing countries, where pesticides are less controlled and used in abundance, pesticide poisoning accounts for the death of approximately 2 farm workers in every 10,000. This information clearly demonstrates that pesticides do pose a risk to human health.

Pesticides are also damaging to the environment, and one group of pesticides called neonicotinoids, which affects the nervous system of many insects, is thought to be partly responsible for the recent decline in the wild bee population, and many other insects. This is of particular importance as bees play an essential role both in farming (pollination) and the ecosystem.

The organic alternative to is encourage predators of the pests onto the crops, which will reduce the pest population and prevent serious loss of yield. However, this is a healthier option, both for humans and the environment, but current evidence shows that natural pest control is not as effective as chemical pesticides, which is problem when looking at ways of feeding a growing population 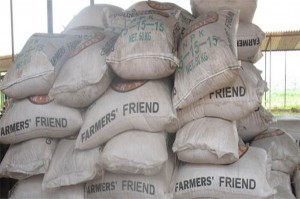 Fertilizers – Regularly growing the same crops in the same fields results in poor nutrients in the soil. To remedy this conventional farmers will add synthetic fertilizers, such as NPK (a blend of nitrogen, potassium and phosphorus which are essential for plant growth) to the soil. These fertilizers are water soluble, and when in the soil they can be absorbed by the root system of the crop. However, if it rains after fertilizers have been applied to a crop these fertilizers will get washed away into nearby water systems such as rivers and lakes. Here, the influx in nutrition causes algae blooms and an imbalance in the localized ecosystem, which is kills many fish and is damaging to the environment. With this in mind, farmers do carefully apply their fertilizers and try don’t fertilize if rain is forecast, which does reduce this risk.

Alternative to this are natural fertilizers (such as manure) or a system called crop rotation, which uses different crops in a field each year. Some crops such as legumes are able to improve the soil quality buy fixing atmospheric nitrogen into the soil. This method also often includes planting a field with non-crop plants, which care then ploughed into the soil to make it nutrient rich for the crops which will be planted the year after. This reduces the productive space on a farm, and doesn’t necessarily replace all the nutrients which are taken out of the soil, which will reduce crop yield.

Antibiotics and hormones – To increase productivity and reduce illness among livestock some farmers chose to add antibiotics and hormones to their feed. A variety of these are available for use, and many (particularly fat soluble ones) are detectable in the milk of cows fed such diets. Although there is actually no conclusive evidence, it is likely that if consumed in sufficient quantities by humans it can alter our hormone levels and disrupt the bacteria balance in our digestive system. It is because of these concerns that use of hormones and antibiotics is not particularly common in the UK, but is in America.

Genetic modification – Genetic modification is a relatively recent development in farming, and is already a major concern for much of the world, especially in America. The concern is over a specific type of genetic modification, which involves adding a gene from another organism into a crop. The purpose of this is to make the crop produce different nutrients, be resistant to different climate or even be more resistant to pests. An example of this it Bt corn, which has been modified to produce pesticides constantly. Aside from the potential health risks from consuming pesticides, it is a concern that the constant exposure to pesticides throughout the year will result in the pests becoming resistant to its effects, similar to what we can observe has happened in MRSA, which has had devastating effects. There is no concrete evidence to suggest this will happen, but it is certainly a possibility.

Another concern is that now crops can be designed to produce a variety of nutrients, ‘super-crops’ can be developed (an example of this is golden rice which has been developed to produce vitamin A). The potential risk of this is that the global plant biodiversity will decrease, which causes an vulnerable ecosystem. This means that if a pest (which may be resistant to pesticides) started to eat the crop, it could have devastating effects on the human and animal population.

There are also many health concerns over eating genetically modified foods, and preliminary studies indicate that genetically altered foods can alter the probiotic population in the digestive system. Probiotics play a vital role in our immune system, digestive systems and possibly even our nervous system, and so alterations may have serious negative implications. However, further studies are limited, and there are no long-term human studies on the health implications of genetically modified foods.

The final major concern over this is that crops will become a monopoly, which we can already see is happening with Monsanto in America. Monsanto is a company which is designs genetically modified crops, but retains the ownership of all the crops, allowing them to control the food industry. Monstanto already own a number of crops, and their impact on the future of farming is very concerning for many people.

Nutritional content of food – It is a common claim that organic food contains more micro-nutrients than conventionally grown food. There is actually no evidence to support this claim conclusively, but there are a number of bias studies both showing this and ‘disproving’ this claim.

There certainly are health and environmental risks as a result of conventional farming, but as science and understanding of these develops, the risks are being minimalized. As genetic modification is relatively new, and rapidly being developed, the full understanding of its environmental and health implications (especially in the long-term) are largely unknown, but have the potential to be devastating. In order to sustainable feed a growing population a combination of organic and conventional farming is a possibility, which will minimize risks of chemicals but also help to maintain yield. This however, is not a long term solution, and much more research is needed in this field. For the time being, organic food is a safer and healthier option to eat, not from a nutritional point of view, but from a safety point of view.

Genetically modified crops are, in theory, a promising solution to the growing population problem, however, their development needs to be carefully and cautiously controlled to avoid the concerns stated above.