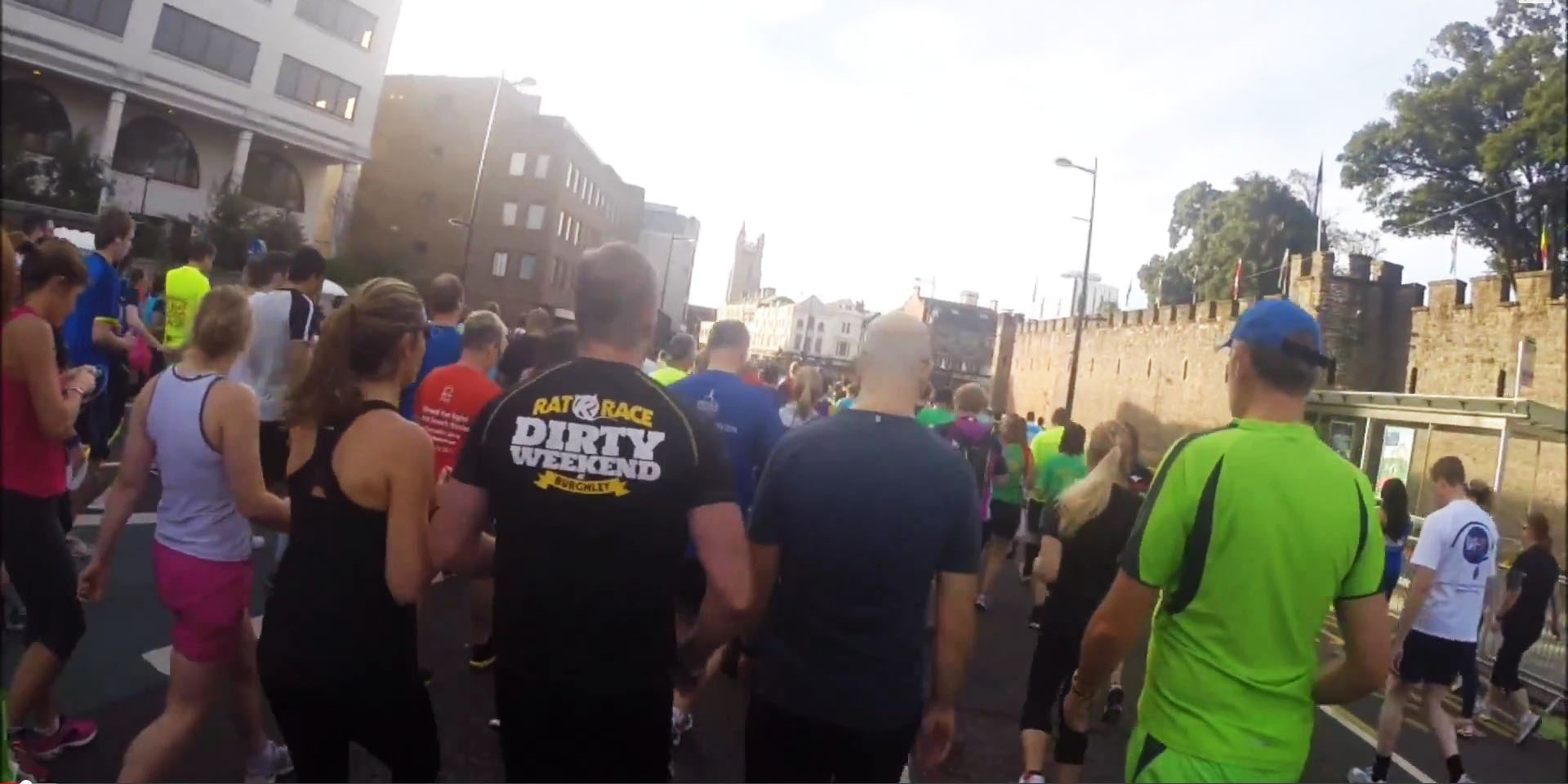 Preformance, kit and tips of my first Half Marathon

On the 6th Oct 2013 I took part in my first half marathon, which I recorded on a GoPro Hero3+. I had wanted to record an audio commentary of the run, but for various reasons I have decided that I’m going to have to do a blog post commentary. You can view the video here, and the commentary is bellow, followed by my performance, thoughts and tips.

Ideally, when doing a long distance race you should aim to do the first mile relatively slowly, and increase your speed gradually. This was my plan. I wanted to the first mile in about 10mins, and increase my speed, with a target time of approximately 2 hours. This didn’t happen at all, and here is a table of how fast I did each mile.

My fastest mile was my first! All wrong I know, and each mile is roughly about the same speed. The reason for this, which you simply cannot really train for, is the atmosphere of the race. Adrenaline was pumping through me and I was really excited to be doing it, and I had so much energy in the first mile I just ran. It is also very hard to pace yourself when everyone around you is doing different speeds. It is easy to either go with the average pace, or, as I did for the first mile, try and overtake everyone (see first few mins of race)… This will either cause you to go too fast and burn all your energy, or go too slow.

Anyway, despite the unplanned burst of energy, I managed to complete the race in 1hour 56mins and 22seconds. Although the atmosphere of the race caused an undesirable burst of energy, it really helps keep you on pace and motivates you through the race. 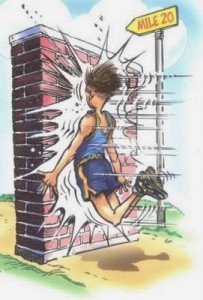 From speaking to seasoned runners, they say they hit the wall at about 15miles, for me, and the people I was running with, I hit it at 10miles. It doesn’t feel great…in fact, it sucks. Fortunately, a few weeks before I decided to do a 13 miles run in training, and so knew what to expect. I would recommend anyone who is thinking of doing a half marathon (or further) tries to hit the wall in training at least once. The more you do it, the easier it is. For those who have never experience ‘the wall’ it actually feels like your limbs are heavier, they almost resist movement, and for me, colours seemed to be less bright. Push through it though, the first minutes of it is the worst.

I tried desperatly to combat ‘the wall’ with energy shots, which I will discuss further on the blog in ‘kit’, and they may have made hitting the wall not feel as bad. It certainly wasn’t as bad as the last time I hit the wall.

You have to make sure you have the right kit:

1 – Trainers
Possibly the most important part of the whole kit. I used Nike Free running trainers (you can see my review of them here) which are essentially a ‘half-way-house’ between conventional running trainers and bare feet running. I chose these trainers a few months ago, after my last paid gave me shin splints. I love them. They feel very strange to run in at first, so don’t get them if you are racing soon, but I would defiantly recommend them. I saw lots of people running in them too, so I’m not alone in my feelings for them.

2 – Running socks
I just had some regular addias ankle running socks, but this is something I need to upgrade next time (hopefully will be getting some compression socks). Still, these socks do the job well, and I would recommend anyone gets some running socks, even if they are basic ones like the ones I used. This is  because when I ran in regular socks my feet were sliding in my trainers, and I had blisters. I won’t be making that mistake again.

3 – Nike 2-in-1 shorts
As the name suggests, these shorts are a combination of 2. The inner shorts are compression shorts, which wick sweat away and fit comfortable tight to your legs. The second parts is an an incredibly light weight material, which, I guess is there to just cover you up… They are great really, legs didn’t get too hot, no chafing and are very comfortable to run in.

4 – Under armour top
This is made from an elastic material which also wicks sweat away. It is cofortable and doesn’t chafe at all. I saw so many people running in normal t-shirts covered in sweat and I was so glad for this top. It won’t stay perfectly dry, but it doesn’t get any wetter than slightly damp, which really is perfect for running in.

5 – Gopro Hero3+
Not needed for running at all, but I had a head mount to record the race. surprisingly comfy. Check out my review here.

6 – Bumbag
Not the most fashionable accessory, but was needed to put my car key in, phone, and energy gels. The repetitive motion of running combined with the weight of the energy gels/ phone did cause the seams to rip a bit, but it was useful.

7 – Energy gels
There are quite a variety of these on the market, but are essentially a blend of sugar, b-vitamins and minerals. They taste bad, but you will be grateful for them as the race goes in. I had 4 during my run, which equates to just over 400kcals worth of sugar.  I had hoped this would be enough to postpone hitting the wall, but it wasn’t for me. I planned to one of these at 3, 7, 10 and 12ish miles.

8 – Phone
Music is a great distraction, it can help keep you motivated and lets your mind wander a bit. Also, I was tracking my run with Endomondo, which is a sports tracking app. You might see in the video that I looked at my phone every now and then – it was to check the app, it shows me how far I have ran pace etc and is quite useful.

Tips for running your first half marathon

Based on my experience in training and participating in a half marathon here is what I would advise:

1 – Get the right running kit, especially trainers. Your feet and legs are doing most of the work, so it is important to make sure you have the right trainers for your feet type (and some running socks). I made the mistake of getting some very generic running trainers, and developed shin splints… I would recommend going to a specialist running shop and talking to professionals. The rest of the kit (shorts and t-shirt) are less important for training, but as you start running longer distances you will need them as well.

2 – Practice pacing yourself. I should have done this, and in hindsight I can really see the value in it. I got so caught up in the atmosphere and overtaking people at the start of the race that I didn’t pace well at the start. Luckily, I still managed to complete the race in the time I wanted, but if I had properly managed my pace I might have been able to do it even faster.

3 – Interval training. I only started doing this towards the end of my training because my shin splints really ruined my schedule, but I wish I had done more (I think once a week would be good). It was very effective at reducing the feeling of muscle fatigue, and increased my ‘comfortable running speed’. Its also a great way to mix up runs (as they can be a little boring sometimes).

4 – Hit the wall before the race. If you are training for your first half marathon, I would try and reach the wall at least once. It avoids any unexpected shocks during the real race.

5 – Let injuries heal properly. It is very likely that you will experience at least one running injury. Its almost like initiation into the world of running. I developed shin splints, and instead of taking a couple of weeks off running to let them heal, I ran shorter distances. This just prolonged the recovery period and wasn’t effective training. I had shin splints for about 2 months!

6 – Learn to drink whilst running. Sounds silly, but it is both difficult and important. During the race there are several points where you are handed a small bottle of water. Drinking it, while running and breathing is hard! I only managed to get a few gulps each time! When I was practicing, the distances I did rarely required me to run with a water bottle, so I never experienced this before. I have been told by more seasoned runner that it is common to find this difficult, but and you do need to practice.

I hope there is something useful here. If you have any other tips please met me know 🙂