Red meats such as beef or lamb are high in a number of nutrients such as zinc, B vitamins, healthy fats and high quality protein. The protein in red meats contains large amounts of an amino acid called L-carnitine, which gets converted into a chemical called TMAO (Trimethylamine N-oxide) in our digestive system. Recent research has shown that TMAO increases the risk of developing heart disease, which suggests that red meat is damaging to heart health after all. But is it that simple? Here I’ll have a look at how l-carnitine is converted to TMAO, investigate other possible causes for raised TMAO levels, and answer the important question – is red meat off the menu again?

Link between TMAO and cardiovascular disease

First of all, does TMAO really pose a threat to the cardiovascular system? TMAO has been shown to cause atherosclerosis, which is the a leading cause of heart dieases. Atherosclerosis is characterised by fatty deposits on the inside of artery walls, which causes them to narrow and harden. Narrow arteries increase blood pressure (in the same way covering part of the end of a hose pipe increases the pressure of water coming out) and hardening will make arteries less flexible, and more prone to rupturing. So yes, TMAO does pose a risk the cardiovascular system.

Although L-carnitine is a precursor for TMAO, in studies where vegetarians, vegans and omnivores who were given L-carnitine, the omnivores produced more TMAO than the vegetarians/ vegans. If it was just down to the amount of L-carnitine in your diet, all groups should have produced the same amount of TMAO, so there must be another factor affecting TMAO production – bacteria. 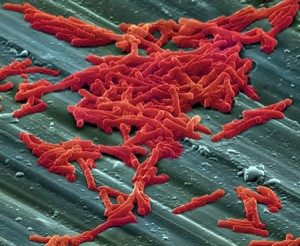 The digestive system contains a very complex population of micro-organisms, some we will have in common, and some will be unique to you.  All these bacteria interact with our food (usually before we even get a chance to), and produce metabolites such as TMAO. However, not all bacteria will metabolise food in the same way, and not all bacteria will metabolise L-carnitine into TMAO.

Further research into TMAO production in the gut has had some very interesting findings. TMAO seems to be produced by bacteria which belong to a group called Firmicutes. A number of bacteria belong to this group, and not all produce TMAO from L-carnitine, but many do, and many are commonly found in our digestive system. One bacteria which is very common is a bacteria called Clostridium Difficile. This bacteria is known to produce a number of toxins, and if its population goes unchecked it can cause diarrhoea and even death in extreme circumstances.

Choline, a nutrient which is thought to have nootropic properties, and is particularly high in egg yolks is also converted into TMAO by the digestive system, and most seafood contains TMAO which we absorb, and this raises blood TMAO levels much more than red meat does. To use a rather extreme example, halibut raised TMAO levels in the blood of participants by 107 times that of red meat. Raised TMAO levels from fish is independent from our microflora, so you could argue that seafood was in fact worse than consuming red meat. However, consuming sea food has long been shown to reduce cardiovascular disease, not increase the risk.

Although the population of bacteria that produce TMAO is a key factor in TMAO production, red meat does stimulate growth of these bacteria. So regularly eating red meat will increase the population, and so in theory, increase TMAO production over time. I would like to say that if you have a nice and healthy digestive system with a good ratio of probiotics to pathogenic bacteria, the probiotics will subdue the pathogens and prevent any population growth if you eat lots of red meat, but there have been no studies testing this.

However, red meat itself is a great source of a number of nutrients , and the fact that it is high in L-carnitine is not a reason to stop eating it. L-carnitine itself has a number of benefits to the body including helping the body to metabolise fat, maintaining a healthy bone density, and even protecting the cardiovascular system.

Red meat is healthy, but it is important to try and maintain a healthy digestive system to reduce the amount of TMAO production from bacteria.

We know choline and L-carnitine are precursors to TMAO, which does increase the risk of cardiovascular disease, and consuming these foods does increase TMAO in the blood. What is interesting though, is that when marked choline is ingested, the TMAO spike in the blood stream doesn’t contain any marked choline. In fact, marked choline in TMAO didn’t appear in the blood for 8 hours after digestion, long after the TMAO spike, and when TMAO levels are considered normal. This means that the marked choline was not converted into the TMAO which spikes into the blood. So what does cause the initial TMAO spike? It doesn’t appear to be the choline, despite it being a precursor to TMAO. It would look like there is still much more research needed on this.

Although the evidence is far from conclusive, there is no doubt that TMAO is bad for your health, and certain bacteria in the digestive system produce TMAO. It makes perfect sense to want to minimise the population of these bacteria, and the best way is to feed the probiotics which suppress the pathogenic population. Suppressing TMAO producing bacteria is just another reason for wanting to keep a healthy microflora balance, and so here are some foods which are sources of/ prebiotics to lactobacillius which you might consider increasing in your diet:

It would also be wise to avoid using antibiotics as much as possible as they cause havoc with the bacteria population in the digestive system, and eat red meat in moderation. This doesn’t mean as little as once a month, but perhaps no more than twice a week. It is very nutritious after all, but as with almost all foods, eating too much is likely to cause problems (in this case, can raise TMAO levels).

The connection between red meat, L-carnitine, TMAO production and heart disease is not as clear as many people suggest. TMAO levels do seem to be influenced by L-carnitine (and other foods such as choline), but a key factor in TMAO levels is the population of the bacteria which produce TMAO.

There are still many unanswered questions on this topic, so there is no clear answer. Will a favourable probiotic/ pathogenic population play a more significant role in TMAO production than consumption of L-carnitine? Why does marked choline only appear in the blood as TMAO after the spike in TMAO levels? If TMAO is so bad for cardiovascular health, why does eating seafood which is high in TMAO reduce the risk of cardiovascular disease? Does the omega-3 fat benefits out weight the TMAO negative effects? We don’t know.

What we do know is TMAO is a risk factor for heart disease, and L-carnitine and choline are converted into TMAO in the digestive system by Firmicutes species in our gut. However, red meat certainly isn’t off the menu, and eating red meat a couple of times a week is unlikely to pose any significant health risk, especially if you have taken care of your digestive systems health.