This is a comparison of the quality of product produced. Rosita has been a part of some rather unethical attacks against Green Pastures, which may also influence your buying... 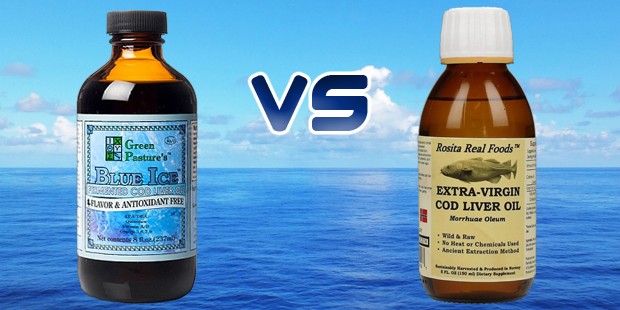 This is a comparison of the quality of product produced. Rosita has been a part of some rather unethical attacks against Green Pastures, which may also influence your buying decision, and you can read about it here.

For a long time Green Pastures fermented cod liver oil has been the gold standard of cod liver oil products, and with good reason. It has minimal processing, naturally occurring vitamins, and even additional nutrients such as co-enzyme Q-10 produced from the fermentation process. However, recently a new product has come to the market, which I have been following closely during its development. This product is created by Rosita Real Foods and is called Extra Virgin Cod Liver oil (EVCLO), and on the surface looks to be comparable (or even better) than Green Pastures cod liver oil.

As EVCLO servings are represented in teaspoons, I’ve converted all nutrient values to mg/g, with 1 teaspoon weighing 4.3g of cod liver oil.

The key differences are:

So nutritionally, the products are comparable but Green Pastures has the nutritional edge because it contains quinones, and the vitamin D is much higher than EVCLO. The advantage EVCLO has is higher DHA and a more consistent vitamin A profile. Still, its pretty close.

When it comes to fish oils, contaminants are a big concern (after all, these are meant to be health supplements, not toxic oils). Fortunately both companies have their products tested for toxic chemicals, and neither have any significant levels of anything harmful. So you have nothing to worry about with either these products. Despite this testing the Norwegian Food Safety Authority has tested Rosita’s products for toxins, and found they are higher than the safe limit, which does raise some questions about their filtration process.

Both products are processed very differently, which is something Rosita is very keen to stress.

Green Pastures ferments the liver of cods, which releases oils which can then be filtered off. This processes uses no heat or chemicals, meaning the fatty acids are not damaged, and the fermentation process creates some useful additional nutrients. With this extraction method there is concern that it can produce some amines, which are toxic. Whilst it is true that amino acids will produce amines when fermented, Green Pastures cod liver oil is tested for amine content, and is free of any biologically significant amount of amines.

Rosita is less clear on how they process their oil. Their website is consistently vague, and states that the oil is extracted using a “very rare ancient extraction technique”. Not being satisfied with this I emailed Rosita asking for more information about their processing. Their response was refreshingly quick, but not very helpful:

Our oils are NON-Processed, that is why you may find our ways of having the oils out of the fish livers so “vague” – simply said there is no processing at all.

It was frustrating to not be given a clear answer, but after quite a bit of digging I found one – once the cod are caught, the livers removed and exposed to ‘winter conditions’. The cold causes the oil to seep out of the livers, which is then gravity filtered and bottled. This method also uses no chemicals or heath to extract the oil.

The is the only area where EVCLO clearly trumps fermented cod liver oil. Even Green Pastures has said that “these oils will definitely provide a better taste experience”. With this statement coming from EVCLO’s direct competitor, I think there is little else to discuss here.

These prices are based on the RRP from the sellers websites. Depending on where you live, you may not necessarily be able to get it for the same price.

Green Pasutres Fermented cod liver oil costs £0.34 per serving in capsule form, or £0.54 per teaspoon. Rosita EVCLO on the other hand is £0.73 per teaspoon. This makes Green Pastures quite a bit cheaper.

Unsurprisingly, Rosita feels like its in the shadow of Green Pastures, and Green Pastures for the first time feels a little threatened by a comparable product. This has lead to the two companies ‘bad mouthing’ each other. I first saw this from Rosita who made some blogs/ Youtube videos questioning the authenticity of Green Pastures. This actually put many people off Rosita (myself included) but this media has since been removed.

Needless to say though, you should take what each company has to say about each other with a pinch of salt, there is clearly reason for bias from either side.

There is quite a bit to consider when picking between the 2 brands, but as far as quality and price goes, I’d pick Green Pastures. This isn’t to say EVCLO is bad, quite the opposite. EVCLO is still a very natural and nutritional product, it’s just produced in a different way. There is certainly nothing wrong with either, so if you can afford EVCLO over Green Pastures, it might be worth trying them both and seeing which you prefer. It might be that the superior taste of EVCLO will sway you.