Following my recent blog post about meal replacement shakes, a product called ‘Soylent’ was brought to my attention, which is a ‘nutritionally complete’ powder, that you make a shake... 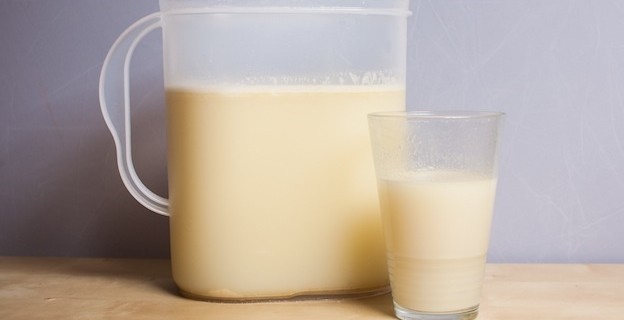 Following my recent blog post about meal replacement shakes, a product called ‘Soylent’ was brought to my attention, which is a ‘nutritionally complete’ powder, that you make a shake out of. The idea for this shake is to eliminate the need for food (and as a result, save time which is spent cooking and prevent food waste). Soylent has had a massive amount of funding, and reached over $1million is crowd funding – clearly a popular idea!

So, intrigued, I decided to do some research into it – is there really such a thing as a nutritionally complete meal replacement?

With no background in nutrition, deciding to make something which replaces food is a bold move! I fully commend Rob Rhinehart on his ambition, but for many critics his lack of nutritional knowledge has been a real issue. Personally, I don’t think that it should be a problem, as long as he does his research. However, in some of his early formulas (which he tested on himself) he was lacking in iron, and sulphur. Now, it doesn’t take a nutritionist to tell you that you need iron, this mistake is a little worrying for me. How much research has actually been done on the nutritional requirements for humans? It makes the project seem very unprofessional and rushed. Although the formula has been modified to supply these nutrients, it really doesn’t give me much faith in Rob Rhinehart – sorry.

The actual ingredients list is still being modified as we speak, but bellow is the basic formula which will largely remain the same in the final product as far as I can tell, there is just some tweaking to do:

The quantities used are based on the information from the FDA on nutritional requirements for the average human.

“The body is a complex machine. There are a lot of substances and chemicals required for it’s optimal operation. However, it is also extremely robust. Many people aren’t getting the recommended amount of any of these substances, but the body is able to compensate via complex regulatory systems.”

Whilst he is not wrong, the body can only compensate for nutritional short falls for so long, then it starts falling apart. I would argue, that the rise in chronic diseases such as obesity, heart disease, type 2 diabetes and cancer are very likely to be due to the fact many people are not getting at least the recommended amounts of many nutrients. Possibly an oversight on Rob Rhinehart’s part, but this might be again a result of poor nutritional knowledge.

Nutritionally, I think Soylent is really lacking. At the moment, there haven’t been any actual studies on Soylent, just a few blogs from people who have tried it, so everything I say is solely based on my experience and understanding of nutrition and how the body works.

My biggest concern is that the nutritional content is very low for many nutrients. It does meet the recommendations of the FDA, but it is widely accepted that these are very low values themselves, and people can require up to ten times the recommended values (read more here). So nutritionally, these values are the more the minimum requirements, and don’t come close to what I would want in one of these shakes. On top of this, we also know that absorption of synthetic vitamins is poor compared to absorption of naturally occurring vitamins from foods. 60mg of vitamin C is quite a small amount to be consuming as it is, but if only half of it is absorbed, that gives you 30mg, which is a very small amount. This will be the case for much of the nutrients in Soylent.

Another concern of mine, is the lack of phyto-nutrients. I may be being slightly bias here, as I am a big fan of phyto-nutrients, but that is only because they are massively beneficial for the body. Phyto-nutrients are important nutrients from vegetables, herbs and fruits; and they support the immune system, benefit the digestive system, protect the body form oxidative stress, inhibit the growth of pathogens etc. Simply put, they are amazing, and fortunately, they are hard not to have in our diet. I don’t know if they are essential for our body to work, but they defiantly are needed for us to be truly healthy. Soylent contain a very small amount of these (lycopene, alpha-carotene, lutein, and various types of phytonutrients can be found in ginseng and ginko biloba). These are a fraction of the phytonutrient population, and if you only use Soylent as food, you will be missing out on a host of beneficial nutrients.

Soylent is missing out on some fats I would like to see in there (olive oil is not a full spectrum for fats). Again, these fats are not essential for the body, but they do help to be healthy. I also find it concerning that omega-3’s are listed as a non-essential, when in fact, they are essential.

A ‘one size fits all’ nutritional rule is a terrible idea, because in reality it will be wrong for everyone. There are so many factors which affect nutritional requirements (age, gender, activity level, genetics, environment). Furthermore, I always modify my diet based on my activity, for example, if I am going for a run, I will eat more carbs that day. I don’t necessarily want more sodium, or fats. Yet with Soylent I wouldn’t get much choice, I either get more of everything, or nothing. It is much more black and white, and I don’t like the idea of not having total control over how much of what nutrients I am getting – perhaps not a problem for many people though.

Does Soylent save waste?

I initially thought this was a great point for Soylent, I hate waste, and it is estimated that we throw away a third of out food as waste. This is crazy, and the idea that this can be cut down is great, especially with a growing population. But thinking about it, I’m not sure how much waste Soylent actually saves.

If we look at the olive oil in particular, it has had to have been extracted from olives to add to the powder, but what happens to the rest of the olives? The oil content of olives is about 15% (but is very variable), so to obtain the 65g of olive oil needed to make Soylent, you will need to use 433.33g of olives, wasting 368.33g (the ‘not oil’ part). Does this not seem extremely wasteful?

I don’t know how the vitamins are synthesised in a lab, but I have spent quite a lot of time in chemistry labs, and there is always some bi-products products which are cast off as waste. Buying Soylent is like buying pre-pealed bananas, you yourself might not make any waste, but the banana skin is still thrown away as waste. The waste still exists, just not in your house.

Maybe Soylent does produce less waste than regular eating, but it doesn’t produce as little as you may initially think.

Eating is part of our culture, and pretty much every culture. Most cultural gatherings revolve around food to some extent, and some of the best family bonding is done around a dinner table. I know the is extrapolating the idea of Soylent a bit further than possibly intended, but the concept of a meal replacement such as Soylent would inhibit a very basic and important social bonding opportunity. We regularly hear in the news of the importance a family meal sat around a table and not a TV. Somehow I don’t see it having the same benefits if everyone is just drinking a shake… 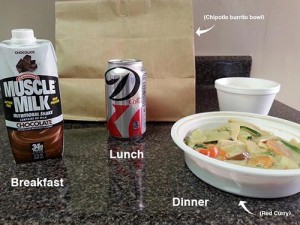 Playing ‘Devils Advocate’ to myself

So far, I have been very ‘anti-Soylent’, I know that for me, it is a poor substitute for my current diet, but could it be a good idea for some?

Whilst researching Soylent I can across this blog. In the blog, the writer says this is his typical diet (see picture on right)

The blogger also considers themselves as ‘a pretty health-conscious person’.

I’m sorry, but I don’t think this is very healthy….

It did get me thinking, perhaps some people can actually benefit from Soylent. From the looks of things, this person is either extremely busy, and so simply doesn’t have the time to cook, or really doesn’t like to cook and has no real interest in food. Either way, all their food is fast food/ take-a-ways – Not very healthy. So, a switch to Soylent may actually be a change for the good!

I forget that sometimes people do not enjoy good food, or don’t pay attention/ care about what they are eating, or maybe don’t have time. For these people, perhaps Soylent is a good idea.

For me, I know Soylent pales in comparison to my ‘real food’ diet. I eat to thrive, not just survive, and Soylent isn’t something which will help me reach my goals. I want to be faster, stronger and healthier than a was the day before, and I exercise regularly and eat well to ensure I am able to do so. For those who actually want to be healthy, I would strongly advise against Soylent. Perhaps once in a blue moon you could use Soylent to replace a meal if you are in a rush. After all, as meal replacement shakes go, it’s not the worst.

However, Soylent might have a place in some peoples lives. I do think Soylent is better than eating junk/ fast foods, and if a Soylent shake will replace these meals, it can only be a good thing.