Non-stick pans are most peoples favourite kitchen appliance, they certainly are mine, and they really are great. Frying foods is actually enjoyable – you don’t have to scrape your food off the pan, they are super easy to wash up and you don’t need to use much oil at all. Needless to say, they make cooking so easy they will get used a lot – almost every day for many people. This has caused some concern about the possibility that the non-stick chemicals can flake off in your food and be toxic. This is a sensible concern – after all, it is something that you use very regularly, and although it might make your life easy for now, you probably don’t want to be using it if it makes your health worse in the long run. So, lets have a look at the chemicals that go into making non-stick frying pans, if they can flake of into your food and see if they pose a health risk.

What makes the ‘non-stick’? 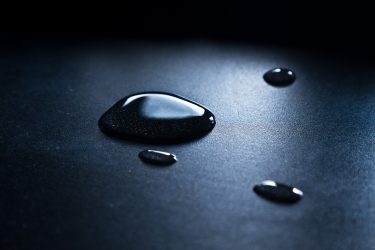 Most non-stick pans, including the famous Tefal pans, are coated in a material called polytetrafluorethylene (PTFE), which is also known as Teflon. It is a chemical made of carbon and fluoride, which sounds toxic, but is actually a very stable molecule. It doesn’t react with acids, alkali, water, fats or anything really. It is very durable, and resistant to scratches, but if you use metal cooking utensils on the pan you can scratch the Teflon off, which then may get in your food. Although eating Teflon isn’t a good idea, it is biologically inert, and will pass through your digestive system intact. It won’t get absorbed, react with food/ enzymes/ cells or damage your digestive tract in any way. Teflon is considered to be ‘biocompatible’ because it is so stable in the body, and often you will find things like heart valves are made with Teflon because it is so safe.

Chemicals made in the production of Teflon

Teflon isn’t the real concern though. In the making of Teflon chemical called perfluorooctanoic acid (PFOA) is used, which can still remain on the finished product.

PFOA is well understood, and known to be extremely toxic to the lungs and liver1, and when the pan is heated, PFOA can be released, and inhaled. Being so well known for its toxic effects, Tefal have ensured that all their pans are PFOA free as of 2003, and have their pans independently tested by various labs to confirm this. Other unbranded pans may still contain PFOA, but Tefal have ensured that theirs do not, which is a good reason to buy Tefal over unbranded non-stick frying pans.

You could always look at the oil you are cooking in, because most common cooking oils will have a smoke point of about 200oC, so if your oil is smoking, you know you are probably above 200oC, but isn’t a terribly reliable method, and there is nothing to give you a warning around the 250oC mark for example, which I think would be useful. Not that your frying pan should ever get to 250oC, and it isn’t that easy to get your pan that high, but I still think an indication would put some concerned peoples minds at ease.

So although the thermal degradation of Teflon can produce some toxic chemicals, your pan will probably never get close to this point. In fact, I can’t find any recipes that call for the frying pan to exceed 190oC, and if you were getting close to 250oC you are probably burning the outside and under-cooking the inside of whatever you are frying, so its not a good idea. 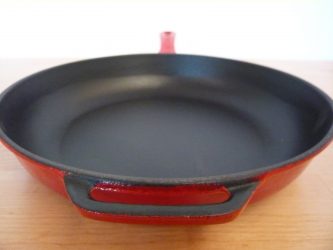 Teflon pans from reputable companies like Tefal are safe to cook with, but if they get heated to extremely high temperatures they can still give off some toxic chemicals which can still be off putting. Ceramic pans are are a very good alternative because they are non-stick, give off no chemicals, are scratch resistant, and can be bought for a similar price as a good quality non-stick frying pan. They can safely be heated up to some very high temperatures and if some ends up flakes off in your food, it is very inert and will pass straight through your system. They can be quite heavy though, and although usually pretty strong, they are more brittle and prone to breaking than metal alternatives.

You then have cast iron pans, which are also very heavy, but very durable. If you get a good cast iron pan it will still be in great condition for your grand children to use. However, they require maintenance if the form of seasoning (see here) which isn’t for everyone, and if you don’t maintain your pan, it will get rusty and lose its non-stick. The iron in cast iron pans can also come off into your food (although a well seasoned pan shouldn’t too much), which causes concern. This is poorly researched and the effects are poorly understood, but it is something to think about if you are considering it to be your regular pan.

There are also aluminium pans, which you should avoid – aluminium is associated way too many diseases to be using it to cook food in. Chances are you are getting too much aluminium in your deodorants/ anti-perspirants already, so you don’t want them in your food too!

Teflon itself is a very safe and stable compound, and is absolutely fine to use with food. It is even safe if you somehow ingest small particles of it, and is considered ‘biocompatible’. However, some Teflon coated pans can contain a chemical called PFOA, which is extremely toxic, particularly to the liver and lungs. The toxic properties of PFOA are well recognised, and although Tefal ensure that all their pans are PFOA free, not all manufacturers can guarantee this. In addition to this, heating Teflon above 250oC can cause the Teflon to degrade and release toxic chemicals. You should never reach this temperature when frying though, because you will probably end up with poorly cooked food. The ideal temperature to fry most foods is 190oC, and Tefal include a red ‘thermospot’ on their pans which indicates when the pan reaches this temperature. Frying foods around this temperature in a Tefal frying pan is completely safe, but aside from the Thermospot, there is nothing to indicate the temperature you are cooking at. I am personally a bit dubious about unbranded non-stick frying pans because of the potential of containing PFOA, but if you stick with Tefal, you will be fine.

If you are in anyway concerned by using Teflon pans (Tefal or otherwise), ceramic pans are a good alternative. They are non-stick, scratch resistant, biologically inert and overall a very safe material to cook with.

If you have an unbranded non-stick pan, they you may want to consider changing it because it may have PFOA on the coating. If you have a Tefal non-stick pan (or other branded pan which ensures their Teflon is PFOA free), there is no need to change it because you will never reach the temperatures to break down the Teflon, but when it comes to getting some new cookware it might be worth having a look at some of the ceramic pans available.