Are You Wearing The Right Trainer?

What running trainers do you wear? Conventional? Minimal? Or do you not even know? Running is great, but it is intense, and you are at risk of doing yourself...

What running trainers do you wear? Conventional? Minimal? Or do you not even know? Running is great, but it is intense, and you are at risk of doing yourself some serious damage… This post will help avoid that damage.

I was reading about the benefits of running and sprinting on Mark Sissons blog here and it really is a great way to get fit and healthy. It improves muscle strength, cardiovascular function, insulin sensitivity, stimulates fat burning and gets you some fresh air!

BUT it is a very intense exercise to do. Think about the repetitive impact on your knees and ankles, the relentless contractions of your leg muscles, your cardiovascular system tirelessly working to supply your body with oxygen, and your body needing to create energy for an extended period of time. There are very few exercises which you would do as long as running; its intense, and if done wrong, can damage you if you aren’t careful.

With this in mind it is extremely important to get the right trainers, and this is where the conventional vs running trainer debates comes in, which one is best? The conventional trainer has been around for years, and people have been running with them for years without problems – if it ain’t broke don’t fix it, right? But in recent years we have seen the introduction of the minimalist, or barefoot running trainer, which works on the theory that actually, before we developed footwear, we were running barefoot for thousands of years – it wasn’t broken then, so why was it fixed?

This trainer is based on the idea that your feet are undergoing high impact repeatedly, and so need cushioning to protect them. They will have a padded heal, and when you first put them on it feels like you are running on cushions. These trainers encourage you to strike the ground with the heal first to reduce strain on your foot, and focus the impact on the most cushioned part of the trainer to reduce and damage and strain on feet and legs.

The running community is split; you have the experienced runners sticking to what they know and are familiar with (and what has worked for them), and then you have the new younger runners, who want a novel and exciting invention.

‘Which is the best?’ Is a very difficult question to answer conclusively, there are a lot of variables to consider and controlling them all is near impossible in the time scale you would need to measure the difference, which makes conduction any clinical trials too difficult to conduct.

However, there is a lot of anecdotal evidence supporting the claims that minimalist trainers are better than conventional, and whilst researching it myself I found a great 2 year casestudy showing just this.

In this case study a lady had been using a conventional running trainer up until 2012, and then for 2 years used a minimal trainer. 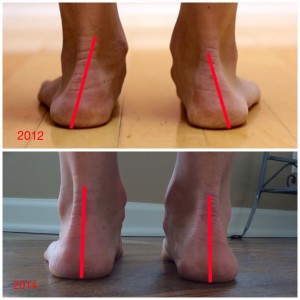 You can see there is a massive difference in the heal alignment caused from using a conventional trainer and a minimal trainer.

Conventional trainers cause the abductor hallucis muscle to weaken, which causes the collapse of the medial longitudinal arch, resulting in slanty heals. 2 year of using a minimalist running trainer has strengthened this muscle, causing the heals to straighten (as they should be).

In the picture bellow you can also see the differences in the arch of the foot. 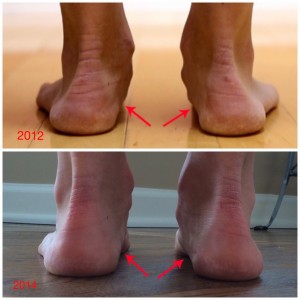 In 2012 the arch was very low, and looks to have collapsed, which is again, due to a weakened muscle structure in the foot. in 2014 the arch is much more prominent, because minimalist running strengthens the muscles in the feet. You can find the case study here.

When I started running not too long ago I started with the conventional running trainer, I had only briefly read about the minimalist running trainer, but I had heard they were for the seasoned runner. After a couple of months of running I soon developed shin splints, which is a very common, but painful running injury (you can find how I treated my shin splints here). Originally I had thought that these shin splints were just something all new runners get, a kind of initiation into the world of running. However, after reading about it a bit more, I found that many people said that minimal trainers helped their shin splints, so I went out and bought a pair of minimal trainers. First impressions were, odd. They felt comfortable, but so very different to the conventional trainer, and within a couple of weeks, my shin splints had gone.

I did later find out that I had been sold an incorrect conventional trainer for my feet type at first, which was probably the true cause of my shin splints, but that aside, my minimal trainers are fantastic.

Have you had any bad or good experiences with minimal/ conventional trainers? Let me know your thoughts on both types.