What is Vitamin A?

Vitamin A rarely gets any media attention, and as a result people are often not aware of how much vitamin A they are eating/ require to maintain a healthy...

Vitamin A rarely gets any media attention, and as a result people are often not aware of how much vitamin A they are eating/ require to maintain a healthy body. This is despite the mounting evidence which indicates vitamin A has a vital role in reducing the risk of a number of modern diseases. What is vitamin A? This article will explain what vitamin A is, how it works in the body, and which foods are abundant in it.

The term vitamin A refers to a group of similarly structured fat soluble compounds which include retinol, retinoic acid and retinal, and can also sometimes include carotinoids such as beta-carotene. It is these carotenes which are responsible for the colour of many vegetables, such as carrots and peppers. Carotenes are not true vitamin A, but are actually pro-vitamin A compounds, which means that they can be converted into a form which our body can use – retinal. This conversion is not very efficient, and occurs in approximately 2:1 ratio. Retinol is often considered to the the true vitamin A, and its structure can be seen

on the right. It is the hydrocarbon tail which extends to the right of the compound which allows it to be soluble in fats.

Unlike many vitamins, vitamin A is toxic in large dosages, which means that its content in supplements is heavily regulated. Toxic dosages are almost impossible to obtain from a normal diet, and is extremely rare.

How vitamin A works in the body

The most well known function for vitamin A is its function in the retina, and facilitating night vision. Retinol can be converted into retinal, which is the light sensitive molecule  found in our eyes, more specifically the retina. When light comes into contact with retinal it triggers a chemical chain reaction, which is ultimately interpreted by our brain as sight. A mild deficiency in vitamin A is known to reduce night vision, and can ultimately lead to night blindness. Vitamin A also plays a very important role in the immune system, and it is needed to produce cells for both the innate and adaptive immune system. These immune cells are needed to kill pathogens and fight infections, which otherwise will damage your cells. Vitamin A is vital for minimizing the amount of damage that pathogens cause to our body, and as a result will help to minimize repercussive ailments as a result of these pathogens.

Vitamin A deficiency is strongly associated with an increased risk of developing modern diseases such as cardiovascular disease and cancer. It is not known weather this is because vitamin A is needed to support immune cells which are able to reduce damage from pathogens and prevent cancer cells developing or if there is another mechanism by which vitamin A reduces the risk.

Vitamin A is also needed for the transcription of a number of genes, and so is required in the normal and healthy function of all cells. The influence of vitamin A on genes is of particular importance in the skin, where it is required to convert immature skin cells in to mature skin cells. This makes vitamin A particularly important for skin health.

Food high in vitamin A 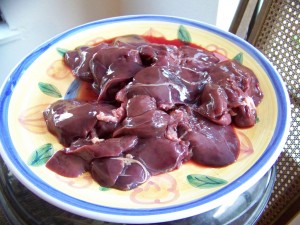 Unlike many vitamins, vitamin A can be found in both vegetable and animal sources. Plant sources are in the from of carotenes, such as beta-carotene which is abundant in carrots and peppers. These must be converted in our body to retinol before our body can utilize them, and because this conversion is not very efficient vegetable sources are not considered the best source for human consumption. Animal sources of vitamin A include oily fish and liver, and contain the retinol form of vitamin A, which is the biologically active form for humans, meaning animal sources are much more valuable than vegetable sources.

What is Vitamin A – Summary

Despite not being as ‘popular’ in the media as other vitamins such as vitamin C or D, vitamin A is as important as any other vitamin to ensure we maintain a healthy body. Vitamin A is involved in a number of biological functions, and a deficiency of vitamin A is associated with an increased risk of cancer and cardiovascular disease, and it is particularly vital for the immune system and skin health. Dietary sources of vitamin A can be oily fish, organ meats such as livers, and brightly coloured vegetables such as carrots.