Nuts are always said to be extremely nutritious, and it has even been thought that a handful of nuts could even count as 1 towards your 5-a-day. This article...

Nuts are always said to be extremely nutritious, and it has even been thought that a handful of nuts could even count as 1 towards your 5-a-day. This article will explain which nutrients are abundant in common nuts, and investigate any potential negative health effects of eating nuts.

Although technically a legume, most people will classify peanuts as a nuts. They are the most commonly consumed ‘nut’ and contain the following nutrients in significant quantities:

It is visible from the table that peanuts contain a good balance of macro-nutrients, and are low in sugars. This avoids any insulin spikes and fluctuating blood sugar levels which are associated with type 2 diabetes and cardiovascular diseases, and allows energy to be slowly released over a long period of time. Peanuts contain a reasonable amount of vitamin B6, which are needed for a number of metabolic functions, especially in the production of energy in cells. It is rare to be deficient in vitamin B6 as it is found in a number of foods, so although beneficial for the body, the B6 in peanuts doesn’t give it exceptional nutritional value. The magnesium content of peanuts however is of nutritional value. Although the amount can vary dramatically, even the lowest value provides the body with significant amounts of magnesium. Many people in the western world are mildly deficient in magnesium, and so consumption of peanuts may help combat this.

Peanuts do contain large amounts of sodium, which is something that provides a serious concern for those with high blood pressure or other cardiovascular concerns. Large amounts of dietary sodium is linked to increased blood pressure, and so the consumption of high sodium foods should be minimized for those at risk. As peanuts are regularly consumed ‘salted’, the sodium which will be consumed is greatly increased, and so is the risk they pose. Peanuts are also susceptible to fungus growth, and when not stored or handled correctly can contain fungi which produce aflatoxin, which isn’t a major concern for most peanut product in the UK, but is something to be aware of.

Generally, because peanuts are quite salty, they are not really considered to by particularly healthy.

Brazil nuts contain much more nutrients than peanuts, and the most abundant are shown in the table bellow:

Brazil nuts are high in fat soluble vitamin E which is primarily responsible for protecting cell membranes from oxidative damage. With modern diets and lifestyles we are exposed to an increasing amount of oxidative species, and so any source of natural antioxidant protection will benefit the body. Brazil nuts are also abundant in a number of minerals, which are needed for a number of metabolic functions, in particular nerve function and regulating bone density. Many minerals, particularly magnesium and zinc, are not abundant in modern diets, making brazil nuts a nutritious addition. Brazil nuts are also exceptionally high in selenium, which plays a vital role in the production and function of immune cells. These immune cells protect the body from pathogens, and are also able to protect the body from oxidative damage.

Eating too many brazil nuts can give you too much selenium, so don’t over do it, but brazil nuts are generally considered to be a pretty healthy nut. 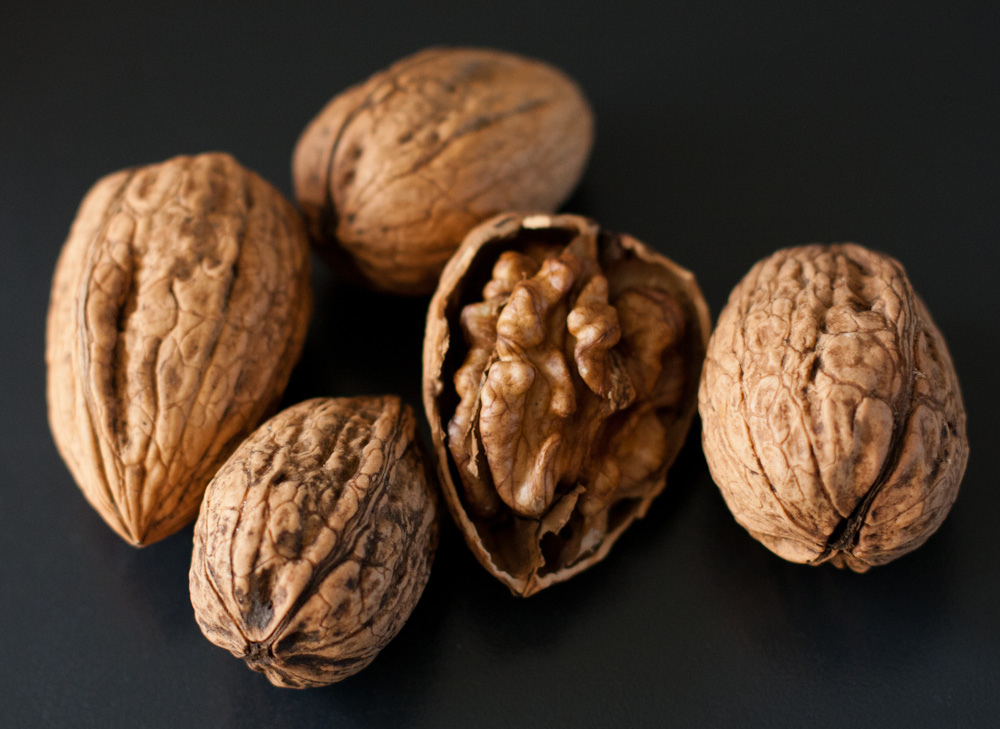 Like brazil nuts they contain a variety of nutrients in abundance which can be seen bellow:

Walnuts contain significant amounts of vitamin B1 and B6, both of which are essential for the production of energy and are needed to maintain normal cell function, however, these nutrients are rarely deficient in modern diets and so does not provide any exceptional benefits. Walnuts are very high in a number of minerals, similar to that of brazil nuts, making them valuable for normalizing metabolic functions. However, walnuts contain smaller amounts of most minerals in comparison to brazil nuts except for manganese, which is more abundant in walnuts. Manganese is needed for a wide number of metabolic functions, including those which occur inside the mitochondria. As only small amounts of manganese are needed by the body, it is rarely in a deficiency. The mineral content and balanced macro-nutrients makes walnuts a nutritious addition to modern diets, but they offer less benefits than brazil nuts.

There are no health concerns associated with eating walnuts, and they are considered to be a pretty healthy nut. 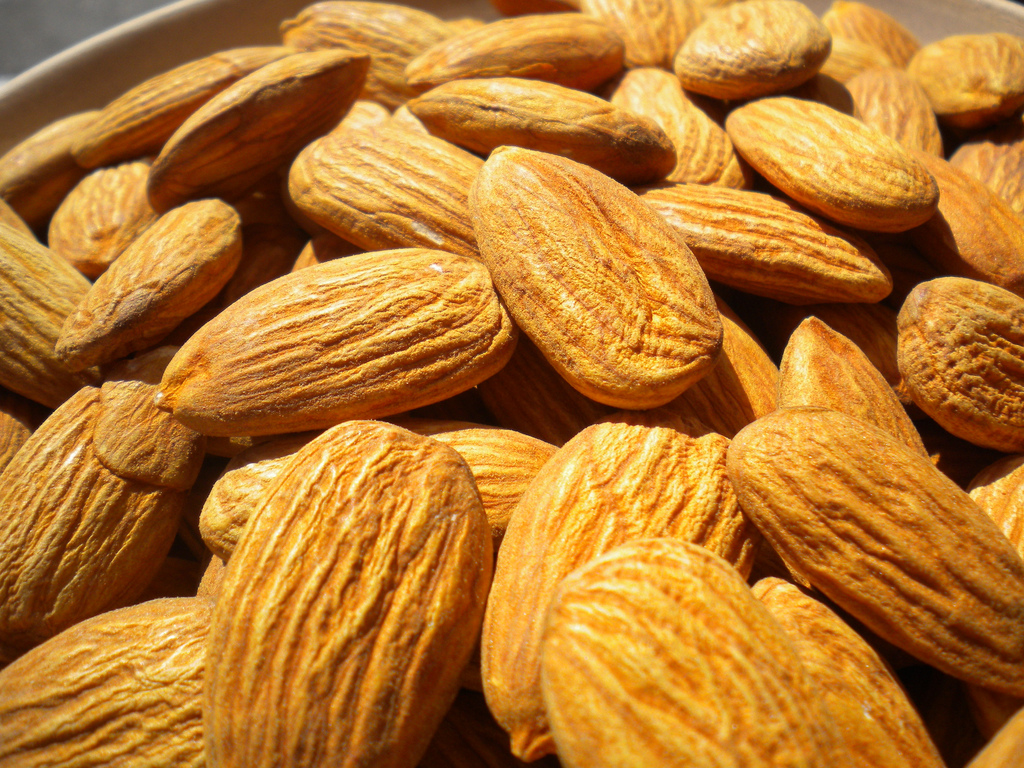 Almonds are another commonly consumed nut, although many find the price of almonds prevents them being a staple in many peoples diet. Bellow is a table showing the abundant nutrients in almonds:

Almonds are high in a number of nutrients, but is particularly high in vitamin E, which will provide the body with protection from oxidative damage. On a whole, almonds contain larger amounts of minerals than walnuts, but slightly less than brazil nuts. Despite this, the amounts of many minerals found in almonds are in nutritiously significant levels, and will be beneficial for the body.

Almonds are another healthy nut. 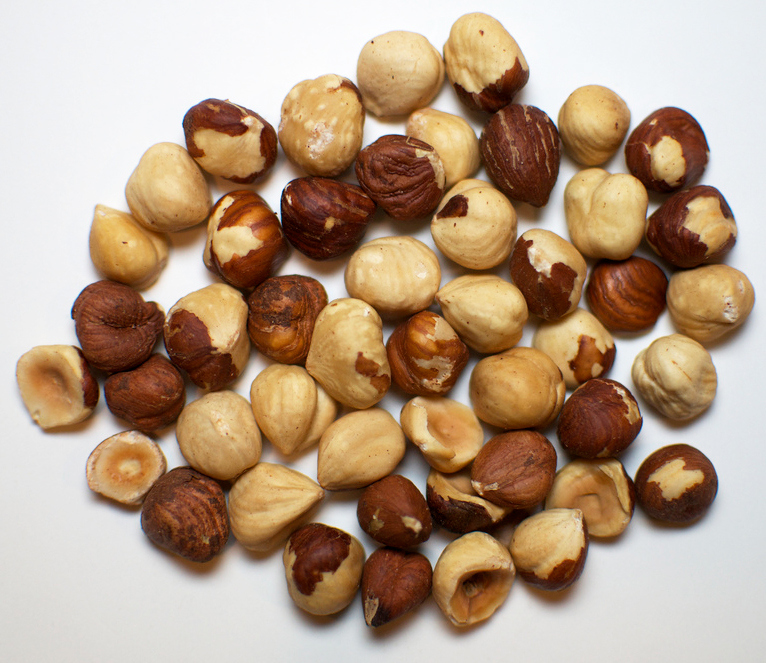 Hazelnuts are the last of the common nuts, and bellow is a table of its must abundant nutrients:

The most abundant nutrients in hazelnuts are copper and manganese, and hazelnuts contain more of these nutrients than any other nut. These elements are not needed by our body in abundance, and deficiency is very rare. This means that hazelnuts provide no exceptional health benefits.

All nuts contain a healthy balance of macro-nutrients and are low in sugars, which allow energy to be released over a long period of time – avoiding undesirable insulin spikes. Most nuts are abundant in minerals, especially magnesium, which many people in the western world are deficient in. The abundance of minerals in nuts makes then a very nutritious addition to modern diets, especially brazil nuts, walnuts and almonds, which contain the most minerals. Some nuts, such as brazil nuts and almonds contain large amounts of vitamin E, which is a powerful antioxidant vitamin, and some B vitamins. These B vitamins can aid with energy production in the body, and are needed for normal cell function. Only peanuts pose a potential health risk because they contain large amounts of sodium, and are often served salted, which may increase the risk of cardiovascular diseases.