You will find a load of health nuts advocating eating dark leafy greens such as spinach, chlorella or wheatgrass because they contain such a high amount of chlorophyll. They...

You will find a load of health nuts advocating eating dark leafy greens such as spinach, chlorella or wheatgrass because they contain such a high amount of chlorophyll. They suggest it is great for health because it is meant to be able to oxygenate the blood. Here is a typical claim: (Source: Young and Raw)

“Chlorophyll will act like haemoglobin (the constituent in our blood responsible for transporting oxygen), which will increase nutrient delivery to and oxygenation of our cells.”

How true is this though?

Let’s have a look at the science!

Chlorophyll and haemoglobin are indeed structurally similar, and you can see this in the image below. There are different types of chlorophyll molecules, and the one in the image is a very commonly occurring one called chlorophyll A.

They actually are quite different, but have a similar core structure, with 4 nitrogen molecules bonded to magnesium (in the case of chlorophyll) or iron (in the case of haemoglobin). The core of the structure is the most important for its function, and the key difference is the magnesium/ iron.

The simple fact that chlorophyll doesn’t contain iron means that red blood cells cannot use it to transport oxygen in the body (as many claim it can), and this is despite the other structural differences. 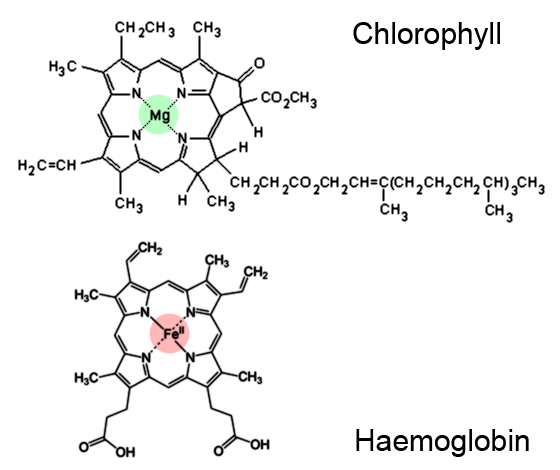 A bit of clever chemical re-jigging?

But with a bit of clever chemical re-jigging in the body, can we not just swap the magnesium for iron? Simply no, because this would mean we are able to absorb the chlorophyll, which we are unable to do.

After extensively searching journal database after journal database trying to find out if we can absorb chlorophyll I have found that there is no direct answer (no one seems to have actually tested it for humans), but I have concluded that we are very unlikely to be able to for the following reasons:

Even if we could absorb chlorophyll in the digestive system, and it didn’t get degraded by the liver, and got into the blood, there is nothing to suggest that our body is able to chemically re-jig the molecule into haemoglobin. It would be quite a complex reaction, which I would assume would require specialised enzymes, which if existed, have eluded scientists. The process would probably actually take more energy than if we were to make haemoglobin from scratch anyway, making it pointless.

Can chlorophyll help oxygenate the blood?

No. This claim seems to simply come from the fact that someone saw the similarity between the 2 molecules, added 2 and 2 together and ended up with 9. This has a very Gillian Mckeith feel to it…

Yet health advocates repeat this claim over and over again. Whether they believe it, or not, I’m not sure, but it isn’t true.

This isn’t to say chlorophyll isn’t without its health benefits though! Chlorophyll is an antioxidant, a natural source of magnesium and is well known for its benefits on the gut (where it accumulates). It is also associated with protective effects against development of cancers in the digestive system. It is a very beneficial nutrient, with actual evidence supporting all the claims I have just mentioned. There is no need to be going about making claims that it can oxygenate the blood when there is nothing to suggest it can.