The chia plant belongs to the Lamiaceae family, which also includes a number of common herbs such as mint, oregano and thyme, all of which are known for their...

The chia plant belongs to the Lamiaceae family, which also includes a number of common herbs such as mint, oregano and thyme, all of which are known for their benefits on our health. Chia seeds are often promoted for being healthy, and this article will show you which nutrients are found in chia seeds,  in what quantities and explain how chia seeds will benefit your health.

Chia seeds are not abundant in many micro-nutrients. Chia seeds don’t contain any vitamins in any significant quantity, and only a small number of minerals in significant qualities, which can be seen bellow:

As you can see from the table, the minerals which are in significant quantities for our nutritional requirements are manganese, calcium and phosphorus. These minerals will promote normal growth and development in the body. Chia seeds are particularly high in calcium, a mineral which is required to maintain a normal bone density and blood pH. Although these minerals are valuable for the body, the few which are found in significant quantities would not have a major impact on your health.

Bellow is a table showing the macro-nutrient breakdown of chia seeds:

The carbohydrate content of chia seeds is predominantly fibre, which aids with digestion health. There are also no simple sugars, and so consuming chia seeds will not result in a sugar spike which is associated with increased body fat and fluctuating energy levels. The protein content of chia seeds is a little higher than you would expect for a plant sourced food, but the amount you would consume per serving is still quite small. The quality of the protein from chia seeds would also be quite poor for our nutritional requirements, and so there are no significant health benefits from the protein content. 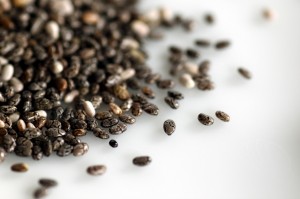 The fat content of chia seeds is quite high for a plant based food, but this is quite typical of seeds. However, one serving (24g) of chia seeds will provide 4.2g of omega-3 and 1.3g of omega-6. Although no RDA has been set, these quantities are high, and will have a significant impact on health. The three beneficial omega-3 fatty acids are EPA, DHA (which are found in fish oils) and ALA (which is the omega-3 fatty acid found in chia seeds). Although chia seeds do not contain any EPA or DHA, our body can convert the ALA into EPA and DHA, which will still give us the nutritional benefits. These fatty acids are known to be essential for a number of important biological functions, such as maintaining brain function, protecting cardiovascular health and reducing inflammation. Western diets are typically deficient in omega-3 fatty acids, and so the abundance of ALA which is found in chia seeds makes it a exceptional nutritional addition to any diet.

Chia seeds also contain a significant amount of omega-6, which is also an essential fatty acid. Omega-6 fatty acids also fulfil a number of biological roles such as brain function and hormone regulation, and the Western diet is not generally deficient in these fats. The optimal ratio of omega-6 to omega-3 fatty acid is still debatable, but it is generally accepted to be between 1:1 and 1:5. The ratio of omega-3 to omega-6 in chia seeds is within the optimum ratios for human requirements, but is closer to the 1:5 (more omega-3 than omega-6). As most western diets are abundant in omega-6’s, but deficient in omega-3’s, the ratio found in chia seeds is actually very beneficial in normalizing the rations.

Chia seeds are a relatively cheap way of dramatically increasing the amount of omega-3 and omega-6 fatty acids in your diet. It is the high amount of these essential fats and lack of undesirable nutrients (such as sugars) which has resulted in chia seeds becoming a popular addition to many peoples diet. Other health benefits of chia seeds include their high content of a small number of minerals, and high fibre content.