Some of you may know that I am not a fan of large pharmaceutical companies, and how people readily choose the drugs they produce over diet and lifestyle changes. Drugs are known to have serious side effects, and often don’t treat the cause of an ailment (e.g high LDL cholesterol), but do reduce the risk of diseases which may arise as a result of the cause (e.g lowering LDL cholesterol to reduce the risk of cardiovascular disease). Drugs don’t address the actual cause of LDL, and so in my opinion, shouldn’t be prescribed as readily as they are.

I am not an advocator of drugs unless there really is no other option, but when people do take drugs I expect them to work, the doctor expects them to work, and published trials show that they work.

Now, I am aware of how statistics can be skewed to show more favourable results, and how animal trials or statistically insignificant trials can be exaggerated. During my degree, I myself would exaggerate some of my findings for my dissertation simply because I didn’t want to present hours of research with a conclusion that ‘more research is needed’. I wanted to progress and I wanted my research to mean more then my finding suggested because I thought it would make a more interesting read for my lecturers.

But this was university, I wasn’t looking into how I can create a drug to prescribe to millions with the intention of treating a disease, I was a student, I just wanted to pass really, no ones lives were at stake, and so hopefully this kind of behaviour from a student is forgiveable.

It was only relatively recently, after reading BadPharma by +Ben Goldacre, that I realized that pharmaceutical companies not only skew their data way out of proportion (more than I did I would like to add), but also hide unflattering data from doctors and create trails which are unfair. More so than I ever could imagine!

Here is an example of how data is easily manipulated:

Imagine that a well know drug (drug A) is effective at treating depression, but has side effects. A company wants to see if a new drug which they have made (drug B) is better than drug A.  One way to test this is get a group of volunteers who suffer from depression (say 100) split them into 2 groups of 50, and randomly assign one group drug A and the other group drug B. You will then monitor the volunteers for things like signs of depression and side effects for a set period of time. The findings of this study should be a great indicator of how effective drug B is. Humans were used (not human cells or animals), the drugs were randomly assigned, and the study isn’t very small (e.g 4 people). However, there are 2 ways to skew this study: 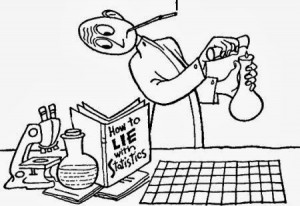 This statistic skewing will now make drug B look amazing, and, as a result make the manufacturer lots of money. This is just one way in which data is manipulated. Now imagine if any and all studies showing drug A were superior to drug B was not published, and that the side effects of drug B were not recorded for the recommended dosage.

Drug B is now looking much better than drug A to the public and doctors alike. Who wouldn’t want drug B over drug A?

The AllTrials campaign is trying to stop this kind of data manipulation occurring. AllTrials want all research on drugs, weather it be positive or negative, published and available for everyone. This will allow doctors to make informed decisions when prescribing drugs, and hopefully put a stop to data manipulation.

Hiding research of drugs has not only caused people undesirable side effects, but will have cost people their lives. You can sign the AllTrials petition here, as well as make donations. Tweet/ blog/ post about it and try and encourage people to sign the petition.