The digestive system is vital in maintaining a healthy and active lifestyle. It contains 80% of our immune system, is responsible for breaking down and absorbing our food, and...

The digestive system is vital in maintaining a healthy and active lifestyle. It contains 80% of our immune system, is responsible for breaking down and absorbing our food, and hosts billions of bacteria. This article will explain how it works and how to keep your digestive system healthy.

In the mouth food is mainly broken down via mechanical action from teeth, which is important as it increases the surface area of the food which will help digestion later in the intestines. There is also some enzyme action from saliva, which contains amylase, which breaks down carbohydrates into simple sugars such as glucose.

Bacteria do exist in the mouth and there are up to 1000 species of bacteria in the mouth. The most prolific species being Streptococci, which is the species responsible for tooth decay, and when high sugary foods are consumed these bacteria are able to rapidly grow and thrive. In doing this, they produce acid which demineralizes the teeth and leads to cavities. Saliva can combat this, and is able to remineralize the teeth and also control the population of the streptococci with acids. However, if sugary food is regularly consumed then more demineralization than remineralization will occur, which results in tooth decay and the formation of cavities. To ensure that your teeth remain hard, sugary food consumption should be minimized. Brushing teeth will also get rid some of the Streptococci for a short period of time, and removing food from between teeth will reduce the amount of food they can consume, which will control the population.

The stomach is a very hostile environment, which means very few species of bacteria are able to survive there. The stomach secretes protease enzymes (which break down proteins) and hydrochloric acid (which has a pH of 2, breaks down food and kills bacteria which may have been on the food). The stomach produces a semi-digested ball of food called chyme, which is then passed into the small intestine. Chyme is easier to form when dietary fibre is present, and if there is too little fibre in your meal, digestion and absorption of nutrients cannot occur.

One of the few species of bacteria able to survive in the stomach is a pathogen called Helicobacter pylori, which burrows into the stomach cell wall to protect itself from the acid. H.pylori causes inflammation in the stomach, which is thought to be the primary cause of stomach ulcers and stomach cancer, and about 50% of the UK is infected with H.pylori. Its growth can be controlled and inhibited by a number of polyphenols such as curcumin found in turmeric and catechins found in green tea, but alone these nutrients cannot eradicate it. If the population is kept minimal then the risk it imposes is very low, but the only way to totally eradicate the pathogen is a course of antibiotics. 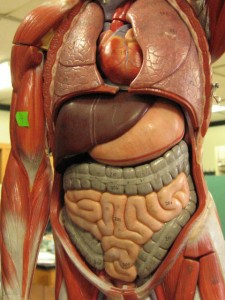 The small intestine is where the majority of digestion and absorption occurs, and is also the home for 1000+ species of bacteria, many of which are unique to the host. The pH of the small intestine is between 7 and 8, as these are the optimum conditions for the enzymes (lipases, amylase and proteases) to break food down.  Lipase enzymes emulsify fat and break them down into fatty acid chains and glycerol, protease enzymes break down protein chains into single units (called amino acids) or smaller chains (called peptides) and amylase breaks down carbohydrates into sugars so they can be absorbed by our gut. Food is broken down and metabolised by the bacteria present in the gut as well. As the chyme slowly moves through the small intestine these enzymes and bacteria break food down, releasing vitamins and other nutrients, allowing us to absorb as much of it as possible before it reaches the large intestine.

Fibre is incredibly important for maintaining the health of the small intestine because it maintains the chyme whilst the food is being digested. This allows food to move through the intestine correctly and can protect the intestine from free radical damage from food. If there is not enough fibre, food may not pass through the digestive system properly, which can lead to a number of problems such as irregular bowl movements or constipation. It is also important to reduce intake of burnt or radical rich food, as this will severely damage the intestine and cause inflammation.

The bacteria population in the small intestine contains probiotics (beneficial bacteria such as lactobacillius spp and Bifidobacterium supp), neutral bacteria and pathogens (such as C. difficile). Probiotics can produce nutrients such as B vitamins and vitamin K2, communicate with and promote the activity of our immune cells in the intestine, and keep the population of pathogens low. These probiotics can be fed with prebiotics, which selectively promote the activity and population of probiotics and so increase the benefits they exert on the human host. Prebiotics are often found in fruits and vegetables, and are abundant in bananas and garlic.

As the chyme reaches the large intestine almost all of the nutrients will have been absorbed, leaving mostly waste, undigestabe fibre and water. There are approximately 700 species of bacteria in the large intestine which metabolize the fibre and produce beneficial short chain fatty acids, which we are able to absorb. The primary role of the large intestine is to absorb water from the digestive system back into the body, thus preventing dehydration and diarrhea. As water is reabsorbed the chyme hardens and forms a stool.

The digestive system is the most complex biological systems, and if damaged, is very serious. In order to maintain a healthy digestive system you need to take care of the probiotics as well as the intestines whilst controlling the pathogenic population. In order to do this the most important foods are fruits and vegetables, which can contain fibre, various pathogen fighting nutrients, antioxidants and prebiotics.