Both krill oil and fish oils are popular omega-3 supplements, but the pros/ cons of each are not clear. This post will cover the key differences between the two...

Both krill oil and fish oils are popular omega-3 supplements, but the pros/ cons of each are not clear. This post will cover the key differences between the two and help you decide which is best for you.

Both krill oil and fish oil are high in the omega-3 fatty acids EPA and DHA which have a number of benefits to the body. However, the forms in which these omega-3 fatty acids are found does vary between the two products. In fish oil, these fats are naturally found in a triglyceride form, but often get converted to ethyl ester forms during processing as this makes them easier to extract. It is the ethyl ester form which many (but not all)  fish oil supplements contain. The ethyl ester forms of EPA and DHA are not easily absorbed by the body compared to the triglyceride form, in fact, triglycerides are 70% more absorbable than their ethyl ester counter parts. This is one of the key reasons why you shouldn’t just go for the cheapest fish oil out there and you should take some time to compare the differences between fish oils.

The omega-3 fatty acids found in krill oil are in neither of these forms, and are found as a phospholipid (similar the the membrane of our cells). These phospholipids can be absorbed without the need of enzymes, where as ethyl esters and triglycerides do require enzymes. Not requiring enzymes means krill oil can be absorbed up to 48 times more efficiently than ethyl-esters which are found in most fish oils.

Not all fish oil supplements contain ethyl esters, only most, whereas all krill oil should contain phospholipids. Generally speaking, this makes the omega-3 fats in krill is the most bioavailable, but a good fish oil product containing triglycerides is a close contender for bioavailability. 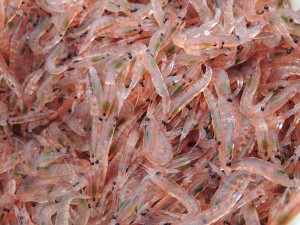 Both krill oil and many fish oils contain vitamin A and vitamin D, and the quantity they are found in largely depends on how the fish are sourced and processed. In some products, these vitamins are destroyed/ removed in the processing, and synthetic versions are often added to the oil after processing, which is not ideal. These synthetic versions do offer the body some benefit, but synthetic vitamins are usually not absorbed half as well as their natural counterparts.

Krill oil also contains vitamin E, but as with vitamin A and D, the quality and quantity is largely determined by their sourcing and processing.

To minimise heavy metal content you want your oil to be sourced from a wild animal, which is at the very bottom of the food chain, and you can’t get much lower on the food chain than krill. So krill oil will be the lowest in heavy metals, but this isn’t to say fish oils are particularly high in them. Fish oils can be sourced from small fish which are still very low in the food chain (possibly only one step up from krill), and processing methods will often extract as many heavy metals as possible from the oil. Many reputable manufacturers of fish oil products have each batch independently tested for heavy metals and have the results made public, so you can see just how low they are in heavy metals. So as long as you stick with a reputable brand, heavy metals are not a major concern.

For some people this can be the deciding factor. Krill plays a vital role in the ecosystem of the oceans, is food for a vast number of species, and is being over farmed. Although there are strict guidelines for krill fishing, the sustainability of this is debatable, and is generally not considered a positive environmental move. Fish oils on the other hand are much more diverse, and as the name ‘fish oil’ suggests, can be sourced from different fish which allows the farming to be much more sustainable. Examples of sustainable fish oil sources are sardines and anchovies, which are very high in omega-3 fatty acids and low in low in the food chain.

Assuming you have a high quality fish oil (triglycerides etc) and a high quality krill oil to chose between, the krill oil will be more nutritious, but there isn’t a huge amount of difference. The primary purpose of these supplements is to supplement your diet with EPA and DHA, which both will do well. However, from an environmental point of view, fish oil is a more sustainable and preferable source of omega-3 fatty acids compared to krill.