Exogenous ketones are rising in popularity as a supplement. Amongst other benefits, they are claimed to help with the transition into ketosis when following a keto diet. This should help eliminate the groggy/ brain fog experience that is common during the transition. It has also been suggested that people can experience all the benefits of ketosis without the extremely restrictive diet by taking exogenous ketones. So, in this article I’ll go through what exogenous ketones are, how they work in the body, and look at the evidence supporting their claims.

The most common exogenous ketone is BHB (which is not strictly a ketone). BHB is naturally produced in the liver during fasting states. It gets converted into acetoacetate (a true ketone) in cells, and ultimately into energy. The BHB molecule in supplements is the same as the liver naturally produces. It generally comes in 2 different forms:

BHB salts – These are BHB bonded to a mineral, usually sodium, calcium, potassium or magnesium. There isn’t much difference between the mineral variations in terms of absorption, so there is no need to look for a specific BHB salt. However, BHB sodium salts will obviously increase sodium levels, which could be a concern for some. Equally, the BHB magnesium salts would also increase magnesium, which you could see as being beneficial. In terms of BHB digestion and delivery there is no difference. BHB salts are easily absorbed, and are the most common form.

The minerals will slightly impact the amount of BHB you get in a given serving. A 15g serving of BHB salts for example will contain roughly 1g of minerals, whereas BHB esters (see below) won’t. This is worth bearing in mind when making detailed price per dosage comparisons.

BHB esters – This is ‘raw’ BHB. These esters are absorbed faster than salts, but because they taste horrible, they are not commonly used. BHB esters are not bonded to minerals or other carrier molecules.

MCTs are a special group of fats that can move straight into the mitochondria and get converted into ketones with relative ease. Both MCT powder and MCT oil can cause stomach discomfort (which ranges from a bloaty feeling to severe cramp), and so taking MCTs in large dosages isn’t recommended. Some people have reported that MCT powder doesn’t cause as much stomach discomfort as liquid MCTs do, but both do pose this problem to some extent. MCTs are often taken alongside BHB. MCTs do not come bonded to carrier molecules.

You’d take exogenous ketones such as beta-hydroxybutyrate (BHB) for a number of reasons:

Both BHB and MCTs are talked about in a similar context, but there are some key differences. BHB is chemical the liver produces when going into ketosis. It not only acts as a signalling molecule for the body that fat is to be the primary fuel source, but acts as precursor for ketones. Amongst other things, it is the BHB molecule that signals to lower blood glucose, and the presence of BHB is thought to benefit the body in a number of ways, even if the body is not truly in ketosis. Think of BHB as a signalling molecule first, and an energy source second.

MCTs on the other hand are simply a good energy source. They can pass straight into the mitochondria and get converted into ketones for energy. The presence of MCT and the ketones it is broken down into will undoubtedly do some signalling too, and can stimulate natural production of BHB in the liver. Think of MCT as an energy source first, and a signalling molecule second.

There is obvious synergistic potential to taking both MCT and BHB together.

How do exogenous ketones work?

Once ingested the minerals are cleaved off the BHB (in the case of BHB salts) and they are absorbed into the blood stream. Here they can enter cells throughout the body (including brain cells as it is able to cross the blood/ brain barrier) and act as precursors to ketones. The ketones are then used as a source of energy.

The body only ever produces BHB during times of starvation or carbohydrate restriction. It signals the body that fats are the new source of energy rather than carbohydrates. By artificially increasing BHB levels in the body it can ‘trick’ the body into thinking it is already in ketosis, and so starts metabolising fats, even though it may not need to.

MCTs are a type of fat that is easily converted into ketones (and so energy) without being in a ketosis state. With this in mind, BHB/ MCTs should be able to help reduce or completely eliminate the ‘groggy’ feeling you get from transitioning into ketosis.

As BHB is a source of energy, it will obviously have a calorific value. Oddly, (and interestingly), there seems to be some discrepancy about what this actually is. KetoSports BHB salts offer 55kcals per 11.7g of BHB, whereas Perfect Keto’s BHB salts offers 15kcals per 11.38g of BHB. This represents a difference of about 73%, which is quite a lot. There isn’t a satisfactory explanation for this difference other than testing for calorie difference in ketones may not be as simply as that of fats/ carbs etc.

It is worth mentioning that although the products vary dramatically in calorie content, both provide essentially the same amount of BHB per serving, and I would say that neither is better than the other. The variation in calorific value is just something that stands out as unusual, and worth highlighting – there are still some blind spots.

There is a reasonable amount of evidence to suggest that BHB and MCTs do work.

You can see that in the first week, blood glucose was on average around 100mg/dL, and after 4 weeks, it drops to around 80 mg/dL. This represents roughly a 20% drop in blood glucose. Interestingly, after 4 weeks of BHB supplementation blood BHB levels also went down. This could be because the body had transitioned into using BHB as a source of energy, and so less was circulating the body.

In another study blood BHB levels rose to just under 1mmol/L an hour after consuming BHB salts, before dropping down to normal levels after 4 hours. In this example the subject was a 100kg male and they took a 18g blend of BHB salts. This represented a 5 fold increase in blood BHB2. 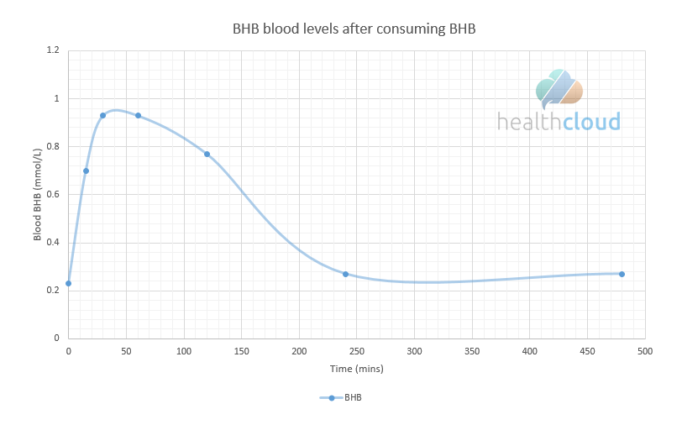 The reduction in circulating glucose and increased blood BHB levels are clear signals that the body thinks it is going through a fasting/ carbohydrate restrictive phase. The lower blood BHB levels shown in the rats after 4 weeks strongly suggests that the body is easily using the BHB as a source of energy, suggesting a transition into a ketogenic state.

So MCT oil supplementation does look like it can increase blood BHB for a short time, but may also reduce it below normal levels over a long period of time. This may be detrimental to those trying to transition into ketosis. Perhaps regular administration of MCTs would prevent this, but there isn’t the research to support it (and there is the risk of digestive discomfort). Although there clearly could be more research on MCTs, it looks like in isolation, they are not as effective as BHB salts. 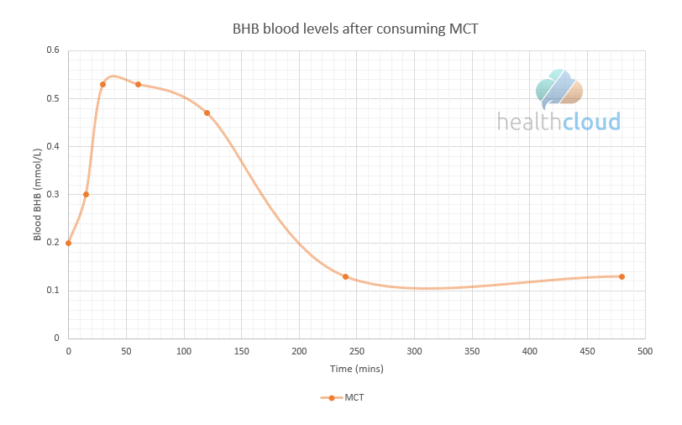 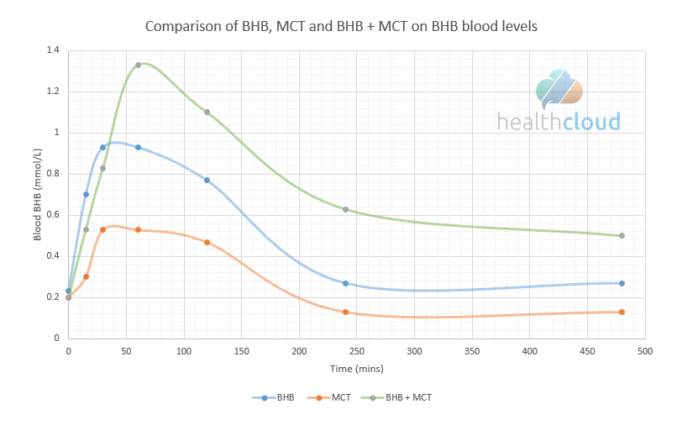 What does elevated blood BHB do?

All this supplementation is tailored towards increasing BHB in the blood without (or alongside) the usual extremely carbohydrate restrictive diet. But why do you want high levels of BHB?

The most common reason is to help transition into ketosis, which it does help with. The below graph shows how blood glucose changes after taking BHB salts. Blood glucose levels drop to the lower end of what is considered to be normal and healthy (72-106mmol/L)3. This is a result of the body no longer wanting/ needing carbohydrates, and using ketones as an energy source to replace them. BHB and MCTs certainly do help to transition into a ketosis state, and help the body ‘run’ on fats. 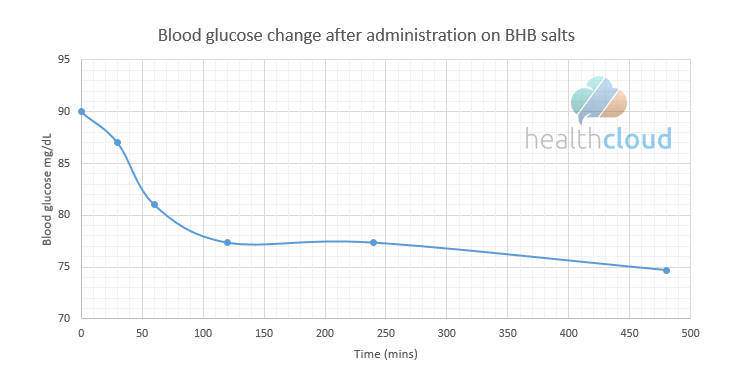 In addition to supporting ketosis transitions, there are other benefits. Even when not truly in ketosis, elevated BHB levels reduce circulating glucose levels can help people lose weight. It can even offer some help to diabetics, and could reduce the risk of blood clots through the reduction of atherosclerosis4. BHB also has the potential to boost moods by acting as a weak agonist for GABA receptors5. It can also help protect against seizures and other similar disorders6, which shows it could be good for brain health overall. BHB also inhibits pro-inflammatory pathways. Seeing as inflammation is often a cause (or a propagator) of many problems, this could benefit a whole host of people.

Exogenous ketones offer a number of benefits. First and foremost, BHB helps the body transition into ketosis by tricking the body into thinking it is already in a ketosis state, and that fats need to be metabolised. In addition to this, BHB salt supplementation can give people some of the benefits of being in ketosis, without eating a highly carbohydrate restrictive diet. These benefits include weight management, mood improvement and even cardio-protective properties.

When taken in isolation, but BHB and MCTs do offer some benefit in transitioning to ketosis. However, they are most effective when combined and compliment each other very well. How they impact blood BHB levels, and the resulting impact on the body is quite well documented. However, there is always room for more research.